The nights are getting quite cool now in Pamplona, so I grabbed a bus to a big store some distance away and bought a fleece. For the last month I've been wearing sandals, not something I normally do. The heels were hard and my right knee began to hurt. I like the sandals, but reckoned they are not worth a damaged knee and trashed them. It was nice to wear gel-heeled shoes again and the fleece was coming in handy. The weather on the day I chose to check out the town of Artajona was forecast to be on the cool side, so slung it into my small pack and grabbed a bus.

Here we go again, heading to a pueblo that was just a dot on the map. Which means I didn't have the remotest clue what to expect. Sometimes such journeys are worth it, other times not. Artajona is about an hour from Pamplona, but I would only have 3 hours there, maximum. The return bus left in the early afternoon. So, at least, I was not there during Siesta.

Riding intercity buses is a great way to take in the landscape as they motor their way along various kinds of roads. Superhighway turned into a 2 lane main route which became smaller as the bus sped it's way through the countryside. Curves began to be sharper and the roads narrower. Eventually the centerline disappeared entirely into some inter-planetary void and I was on a good old country road. Dirt and gravel roads were seen on both sides as the driver of the Alsa mini-bus put pedal to the metal between the small towns where he stopped to let passengers off and pick up new ones. Each town has it's introductory and end sign. Finally the one reading Artajona appeared and the driver eventually pulled into the tiny bus stop. 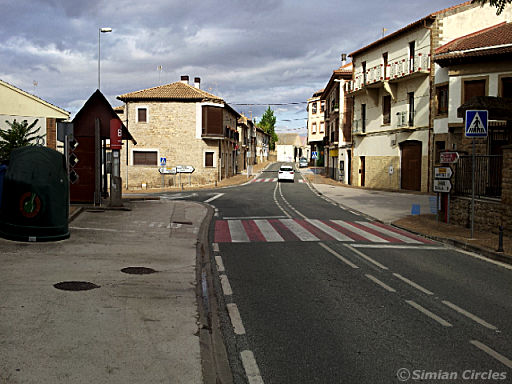 Visually, It's a combination typical of many places. The older part of town, with narrow streets and buildings going back a few hundred years. Then, more modern architecture exists outside of that and is growing with recent additions. 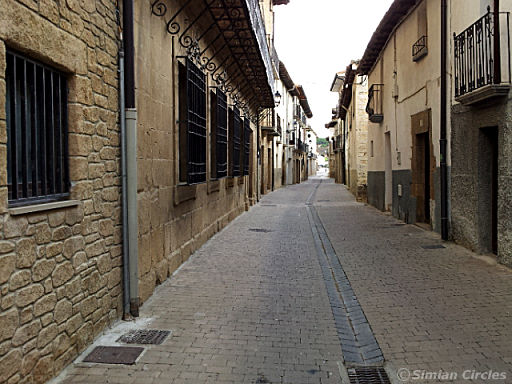 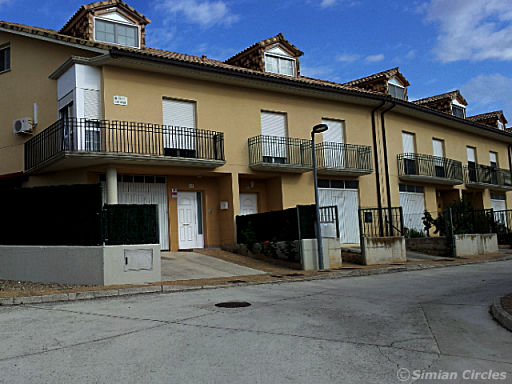 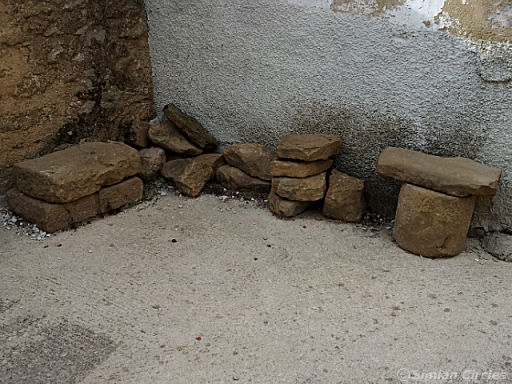 Walking through the old town, I found these makeshift seats. Nice touch.
Artajona is not level and provided some good exercise as I wandered around the various sections. Not only was the temperature cool, a stiff wind accompanied it. So my fleece was on and zipped up most the first two hours.

The more I looked around, one thing began to stand out. This is a farming community. Fields outside of town had: corn, wheat, olives and other crops growing. There is a large building where tractors and farming equipment can be serviced as well as fueled up, this was apart from the regular gas station. 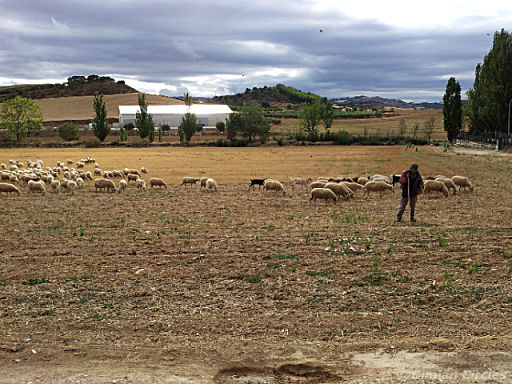 Here, a shepherd has about 300 head of sheep grazing on a cut field near the edge of town. His two sheepdogs are off to the right, out of the picture. The rest of the flock are over to the left. He was making sort of loud grunting sounds to the wooly lot. I also noted three bells, they would be hung around the necks of the lead sheep. I stood and watched this for some time—all very pastoral. 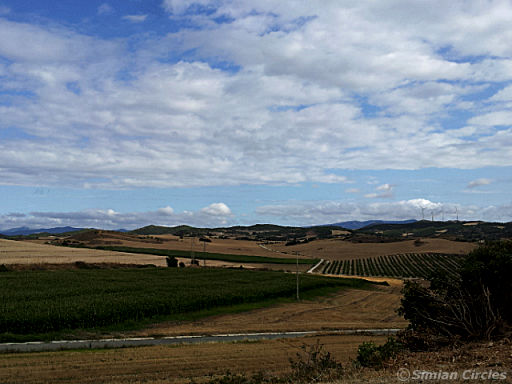 Part of the landscape surrounding Artajona. Flat does not enter into the equation. 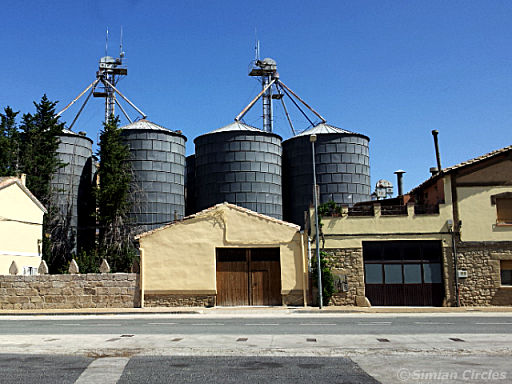 Some of the grain silos in the vicinity. A very large complex is also outside the town on the way to Pamplona. 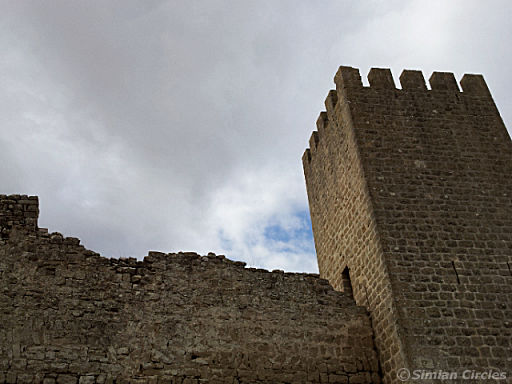 One thing here is El Cerco de Artajona, a medieval fortress, from the 11th century, which makes it near on 1000 years old. I did spend about half an hour there, it is being restored and has a ways to go before completion. There was scaffolding and a very large crane present (destroying any chance of taking a decent photo). The large church inside the ancient walled town was closed, as was the information office, this is noted on other websites as well, I wonder if they are ever open. People also live here, but I imagine the house prices are quite steep in comparison to the rest of Artajona and the almost 1700 residents. 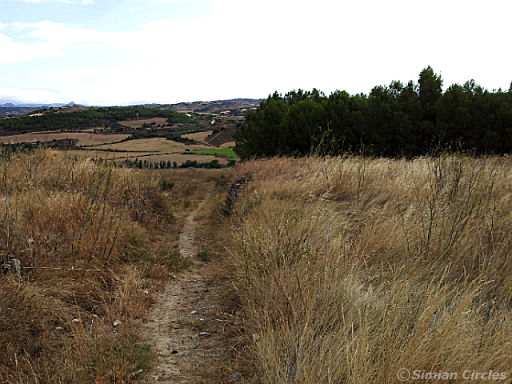 On the way down from El Cerco, I saw this trail—how could I resist. It was not very long and I ended up near some newer housing on the edge of the pueblo.

By now the sky was nearly clear, the sun out, the wind warmer and the fleece went back into my pack. I still had nearly an hour before the bus. Only one bar/restaurant could be found, a butcher shop and a small supermarket—where I bought a 4 pack of strawberry yoghurt and counted that as lunch. The last 2 packs were finished off on a bench in another edge of town. I stretched out on it for a while and warmed up in the hot sun, then went back to the stop and caught the bus to Pamplona.

What do I think of Artajona?

First off, I like it. It's a peaceful town, very farm based with a few other local industries. The one aspect which I felt they're not really sure which way to go, is in regards to the El Cerco. A choice is looming. Tourism or just stay the nice farming community it is?

I spoke a little with a Guardia Civil officer (I guess the nearest to police they have there), whilst looking for the way to El Cerco. If the powers to be decide on a big tourist thing with that medieval structure, they are going to need more police, because like all other touristy places, the scum of the earth will arrive to steal from and scam the tourists. Artajona can do very well without that.
. . . . . . .

You people have a really nice town—don't screw it up.
Sep 01, 2019
More posts from: The Basque Country
San Fermin 2022 A bit too long in Legarda Back on the road The last page is missing Pamplona without the leaves A festival and change of plans 3 hours in Artajona Durango Buses and a concrete artist Seven and then Faces of the San Fermin Walking Pamplona's City Walls 5 Tips for Surviving the San Fermin The Walls of Pamplona Bolivian Festival of the Virgin Urkupina Cold beer, silence and a water snake Olite in the afternoon Oronoz-Mugaire to Legasa by foot Narrow streets and ancient churches Two hours in Beasain San Martin in the mountains Sunday afternoon stroll San Fermin 2015 - Part II San Fermin 2015 - Part I The artist and the shopkeeper Pamplona's Old Town Festival Back to Basque A short stay in Pamplona