Couple of days in Seville

An overnight bus left me in the city as the sun was rising. At first nothing was open, but a little sort of coffee place was opened up by the owner, so I hung around for a bit and got my morning dose of caffeine. Following that, I walked down to the river and had my introduction to the city.

Wall to wall graffiti filled my eyes. From where I took some photos, that was all you could see. Unfortunately I accidentally deleted about 30 shots—first time I've ever done that. So here's an old Google street view of it to give you an idea. There's a lot more now than when this was taken.

An hour later a small watering hole opened that had Internet access and I checked out the hostels online, to see if there were any worthwhile possibilities to stay. I picked the one with the highest percentage and headed for it. All I had was the name of the street and nearest plaza—I had 4 hours before I could book in.

To those of you who are unfamiliar with the Middle East or North Africa, you will not have experienced a Medina or Kasbah. As I walked through the narrow streets, it immediately struck me that I was in the middle of one. A maze of narrow roads and alleys connecting at logic defying angles going in all directions but straight. 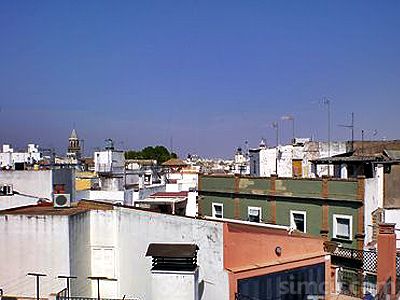 Originally the Romans built the old town only to lose it to the Moors, in 712 AD, who redefined the meaning of getting totally lost within 5 minutes. A few remnants of Rome are there, but primarily this is typically North African. It's pretty much the same layout as it was over 1200 years ago, but with Spanish buildings replacing the old ones and adding to the exotic confusion. Yet it is beautiful in its own way. Little plazas, many of undefinable shape, with fountains, statues, areas for markets and the like popping up all over the place. In one, I found the hostel—eventually.

I only came to Seville only for a quick visit. It's part of the European backpackers route. Cities like Barcelona, Granada, Cadiz and others are in the South of Spain. I guess you'd call it a party town in that respect. There is a lot of history here and some World Heritage sites. I reckoned two nights and then back to London as I had accomplished what I'd come to Europe on this initial trip for.

Food to die for

The highlight for me was not getting lost a dozen times, nor seeing the old Cathedral. No, it was a meal. Noa, a girl studying medicine in Tel Aviv, decided it would be a great idea to feed us all Shakshuka. So we sat around the table on one of the roof sections and ate this fantastic dish in the evening—not the usual time for it. Shakshuka is primarily a breakfast dish, popular throughout the Middle East and North Africa. It appears to have been started by the Berbers, a nomadic people from the Atlas Mountains of Morocco (which makes a lot of sense because they travel around as migrant workers). Chances are they did an Olive harvest in Israel thousands of years ago and some dear Jewish woman asked, "so what is this you are eating then?" The rest is a hotly debated dish, everyone does it a bit different and Noa's one was no exception. All kinds of vegetables in a thick, spicy, tomato sauce with eggs on top and it tasted truly great—loved it. A big thank you to Noa.

Seville is the fourth largest city in Spain, a tourist attraction in many ways and spread out in all directions from the old city center. I didn't do much there, it's too big and too touristy for me. I just wanted to see what it looked like. It was also in the high 90's temperature wise.
More posts from: Spain
Madrid memory Reaching Pamplona differently Couple of days in Seville