There is the time you don't want a color photograph. Portraits of people can often have more effect when black and white. Changing an image to greyscale in MacGyver Photo Editor is not all that difficult and can enhance that shot of someone in a way color misses out. 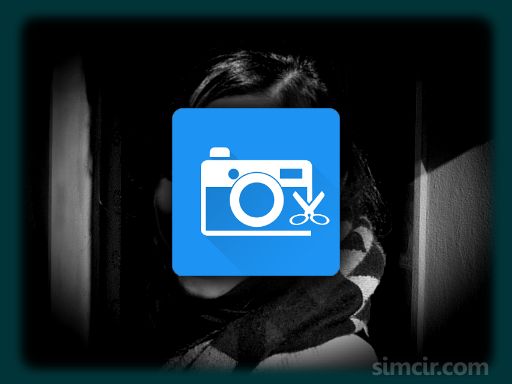 The photo was taken in February 2016 whilst in Italy. The sun was out and it was early afternoon on a bright day. I used my little Leica/Lumix camera and tried to frame her in the doorway (it was the least 'busy' spot), on the spur of the moment so the shot wasn't too 'posed'. 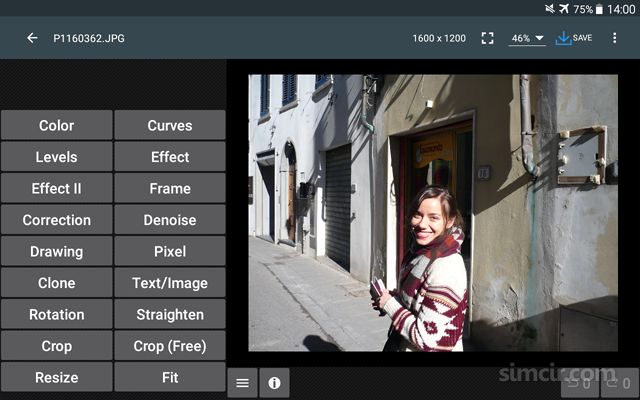 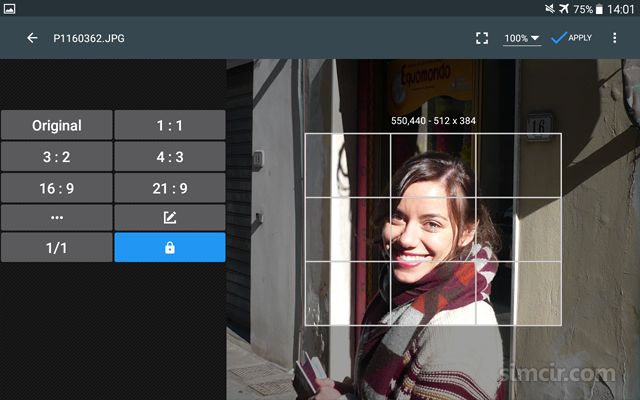 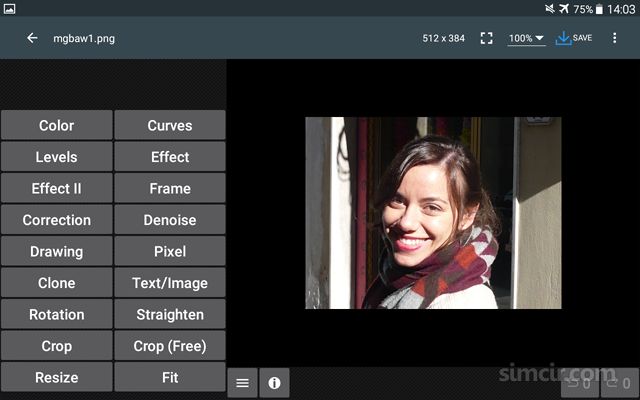 As you can see there is a lot of glare and distractions that need to go. The doorway needs to lose: that thing behind the top of her head, the wire loops at the top left and the rough bit at the bottom left. Both sides of the door have to be subdued to lose the glare. Then those shiny parts of her face need toning down and bright bit at the left of her mouth needs to go and some more stuff. So there's a lot of work that needs to be done, using the Clone tool. The object is for the girl to stand out and the background be subdued—but not blurred.

First of all the color has to go. For that, there are two things I did. 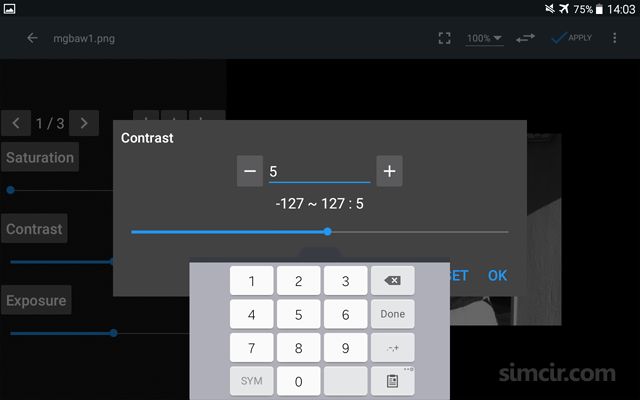 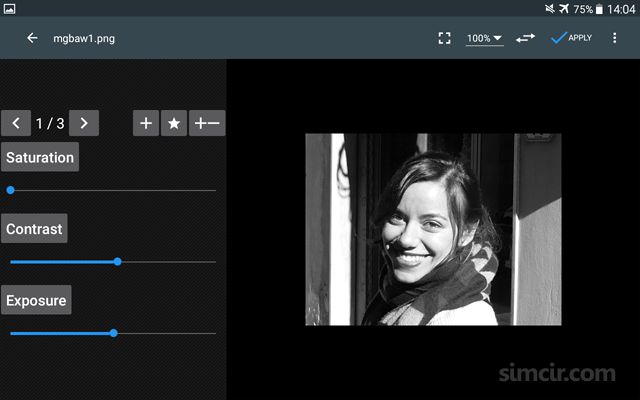 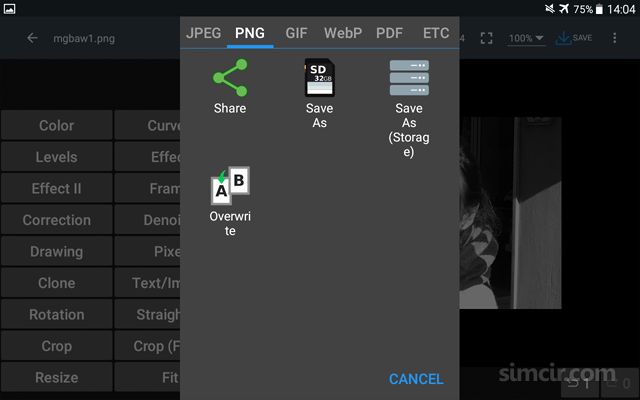 You now have a greyscale image. Save again as a PNG with a new name.

If that's all you need to do, just make a color image black and white, then you are finished. Save it as a JPEG (see further down how to do that).

Should you want to make the image a lot nicer, then Continue.

But you're going to need 2 things first
A lightweight glove which can be worn and not affect the tablet at all. Plus, a decent Stylus, not one of those cheap and nasty things that come with phones or you get 20 for a dollar etc., from Amazon. No, you need something a lot better.

I use this. They call it a B&D stylus. It's got 2 tips (small and regular) and is quite solid. Plus comes with 20 extra of each tip. Don't get rough with them though.

For retouching, this tool is very handy. Used right it's a bit like airbrushing a photograph. Your hand needs to be steady though, this is where the glove helps (cut off the first two fingers of the glove). It allows you to rest your hand on the face of the tablet so that any precision work can be done. 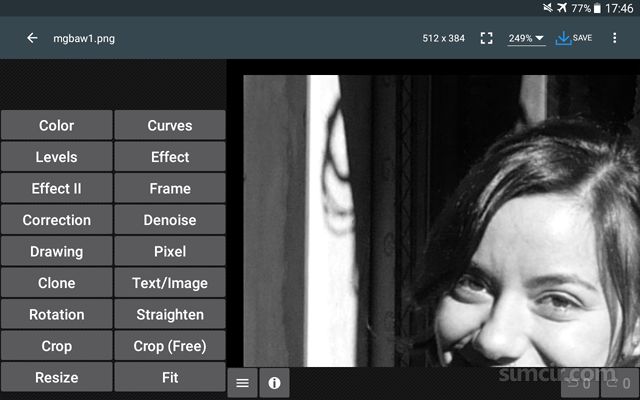 There's a lot to do, so start out with the top. Before you Tap Clone, zoom up to the place you will begin. In some cases you will need almost maximum zoom.

I saved the file again with a new name for the Cloning work. Then began on the 2nd new file, bit by bit, to remove all the glare and retouched things like the lower right eye lid to remove the glare from it.

Note the name of the file in the upper left of the screen, you will need to make sure it is the right one. If not, tap the back arrow next to the name and open the correct file.

Look at the above image. See the stuff above her head, it all has to go. The cables in the top left doorpost as well. Then there is that shiny bit on the right lower eyelid and a light bit just above it. The Clone tool can do all of this.

The button for the Brush settings 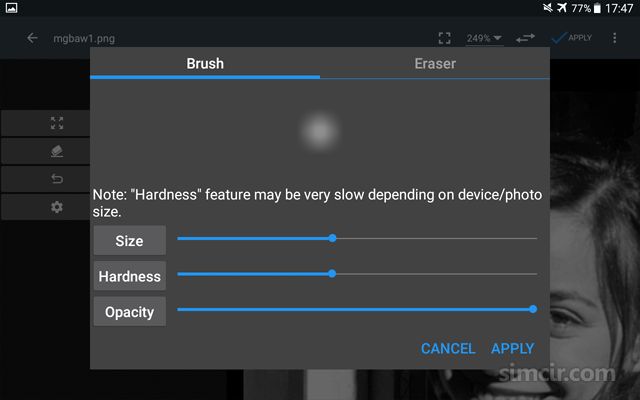 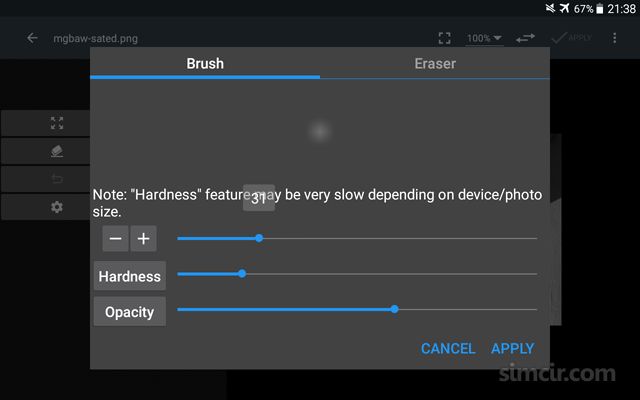 The setting for the Clone tool are the sliders you see there. If you tap a slider button its numerical representation shows for a few seconds.
Important! If you run out of sceen space when you are zoomed up. Apply and Save/Overwrite, then move the image to the next portion. Some things take several of these moves to complete the Clone. 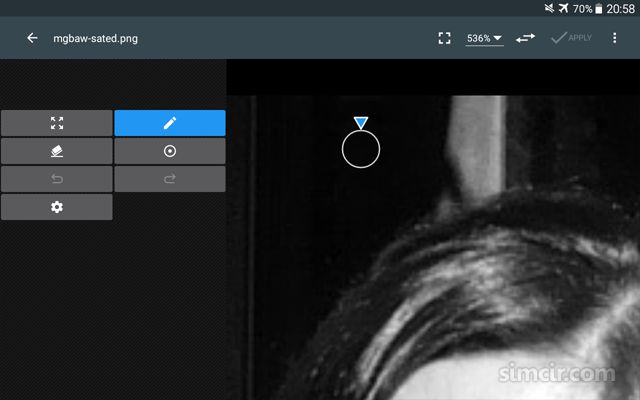 Before
See the Circle under the Arrow bit, that is where you place your stylus to move the Cloner to a place you wish to begin the Clone. From the position you see here, I simply tapped in different places (not brush around) until I got close to the hairline. All the time Apply, Save/Overwrite.

At the hairline, after saving, I made the Size smaller and the Opacity about 100, then tapped over and over again near the hair. This kept the hair, but removed the post behind. There is a door behind and I did not remove that because it is very dark and not distracting.

Warning!
Take a break often.
Smartphones and tablets can destroy your eyesight! Backlit panels have been doing that for decades to Graphic designers and typographers. The screens on these now are much brighter than the old cathode ray tube monitors (which were bad enough).
If you are not used to doing this, it will take you a long time. The one you see here, is the second version. The first one took me over an hour with breaks, because I was still trying to get to grips with the App. 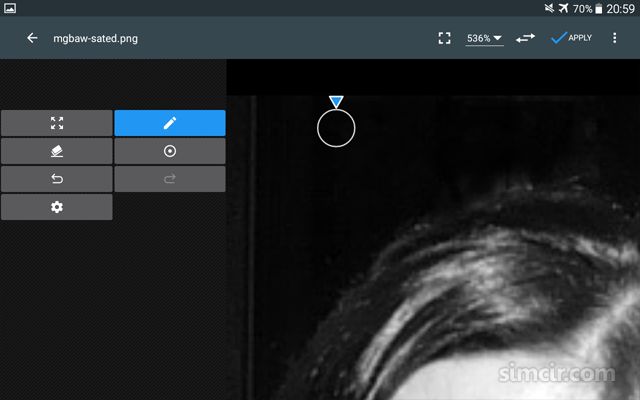 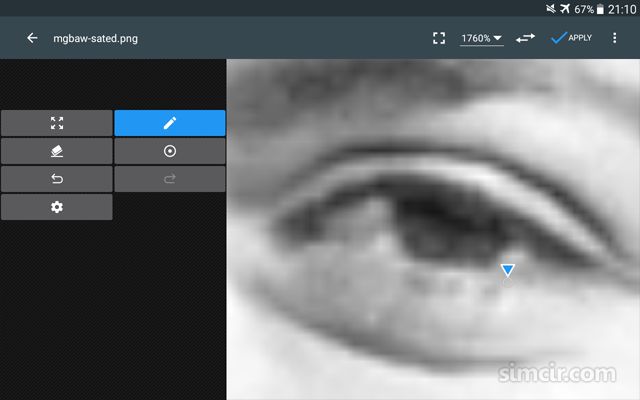 This is hard to see here and not much better on my tablet. The Size is very small and fully hard with some Opacity. I sat the circle and arrow in 2 spots. One for the eye, just above the eyelid and the other where you see it and tapped my way along the eyelid. It took several tries before I had it right. When I did get a bit right, I did the Apply and Save, then moved to the parts left to complete. 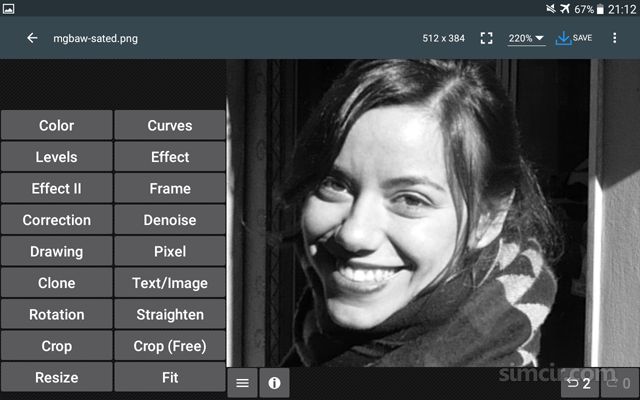 It was here that I did a soft, Clone with an Opacity of around 75, to reduce the glare spots on the forehead and tip of her nose.

The doorposts were next, I removed the cables and stuff at the bottom left first. Then zooming out I ran a larger Size and 75 Opacity over each doorpost to tone them down. 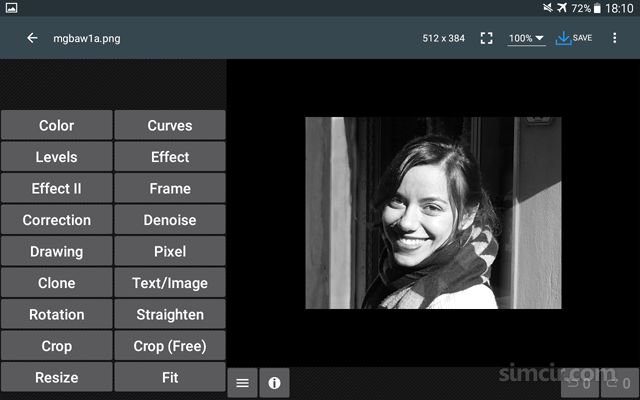 The image is now ready for the final rendering. I saved it with a new name first, then went and had a cup of hot Chicory.

At this stage all I needed to do was finish it off. Two processes were done, first in Color I set Exposure to -50 and Contrast to 25. It was then I noticed the cheek on the right needed to be toned down a bit and did that with a Clone. Now I want her to be more foreground, for that a Vignette was used.

Vignette
In the main menu, Tap Frame and then Vignette—not Vignette (Old). I did two. First a 60 percent process then afterwards ran a 69 percent one over the top of it. Doing it like this gave me a better vignette than attempting it all in one go. 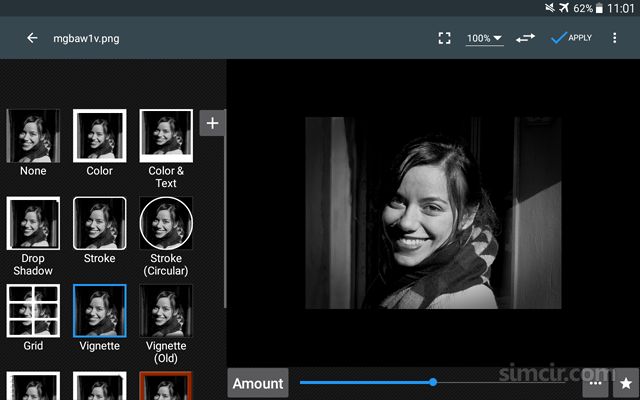 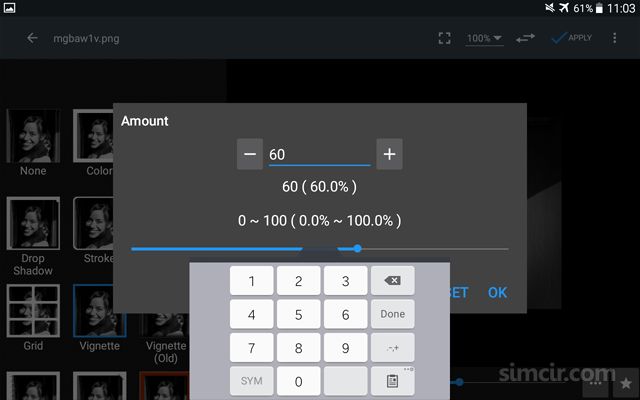 That did it. The image was ready for my watermark. 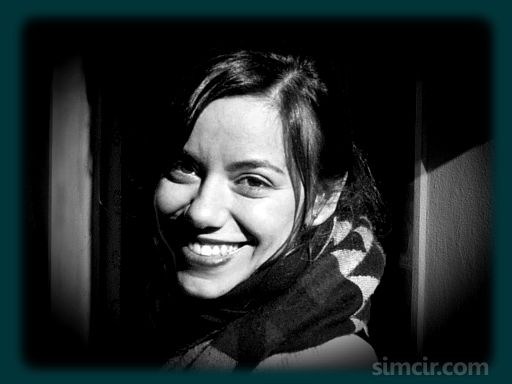 A number of MacGyver Photo Editor functions have been used here. They are representative of the App as a whole. We have:
All that's left is how to add your watermark to your images.