Using Curves in MacGyver Photo Editor gives you one of the most powerful tools in the package. It is similar to Levels, where you adjust the overall image based on a graph. An entire image could made fully publishable, just with the Curves Function. With it you can produce better tones throughout the image. It is more complicated than Levels though. 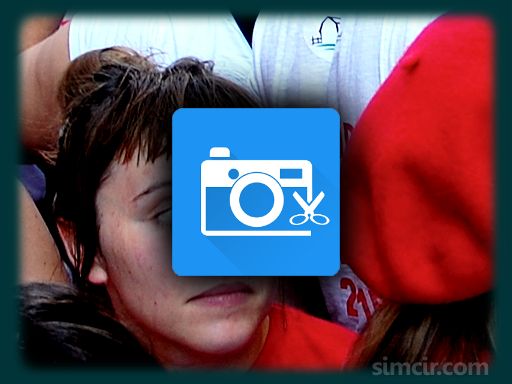 A lot of people avoid using this, because there is a lot to learn and on mobile devices that we are used to, you do not have the amount of control as you do in Photoshop etc. However, once you become accustomed to using this function, you'll probably not bother much with the others.

Tapping the circle over the top left of the image, hides the graph so you can see more clearly what the photo looks like at those settings. 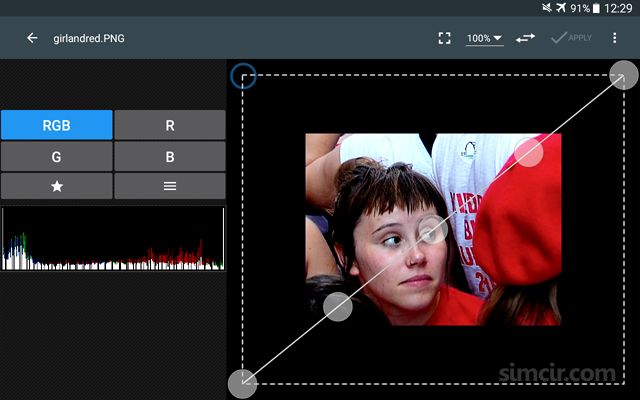 The default setting with 5 points.

The girl is part of a larger photo taken by Greg Rodgers at the 2015 San Fermin Festival. 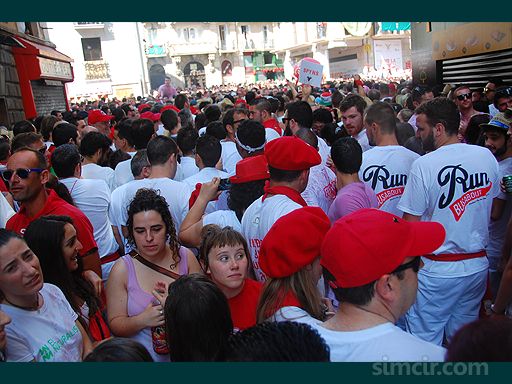 © Greg Rodgers
The original, 3008 x 2000 pixels and resized for here.
Notice the girl. She's tiny, probably about 4 feet 10 inches at the most. The right side of her face is covered with Sangria, her hair is more than likely soaked in the stuff and the crowd is increasing. At this location, a press sometimes happens and from the look on her face, she is wondering about that. It's sort of a pre-terror expression—should I be really scared or what? For those who have never been there, this is an average crowd stage during the San Fermin—it gets worse.

I chose this image because of all the red in it, to show what happens as the spots are moved in the Curve.

In the left set of buttons, tap the menu bars at the bottom right—just above the small graph. 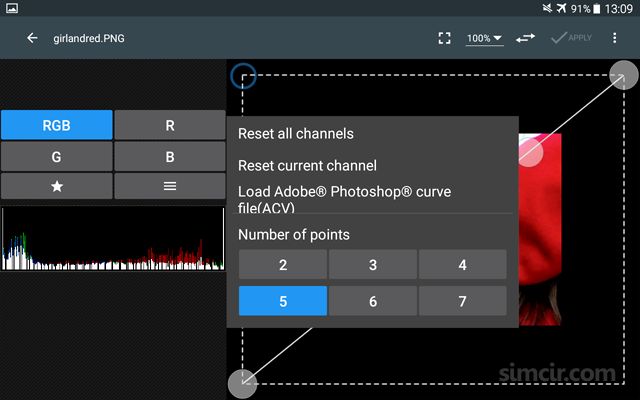 The default menu setting of 5. Change that to 3.
Notice that by tapping a bar or icon a dialogue/setting appears. This is common throughout MacGyver. Tap one of those little or large buttons and you begin to discover all the levels and sub-levels within one function. 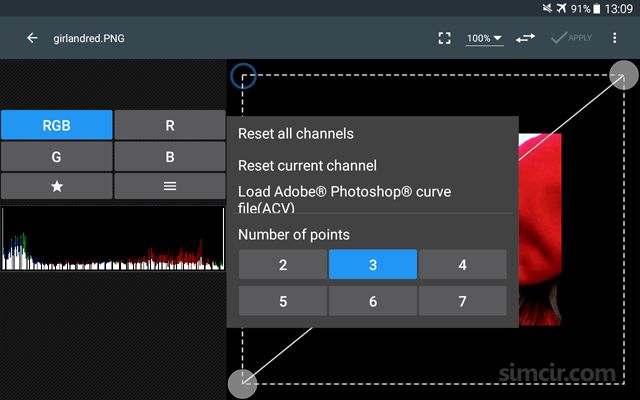 Now there will only be 3 points on the curve.
I'm using 3 points here because that is the easiest way to understand what is happening. I found my stylus worked a bit differently on Curves (as well as Levels). Normally my touch is very light and instant response happens. Here I needed to slightly press a point a split second longer than normal. Points can be moved in any direction.

Keeping the middle point as close to the center of the image move it up to brighten and down to darken. 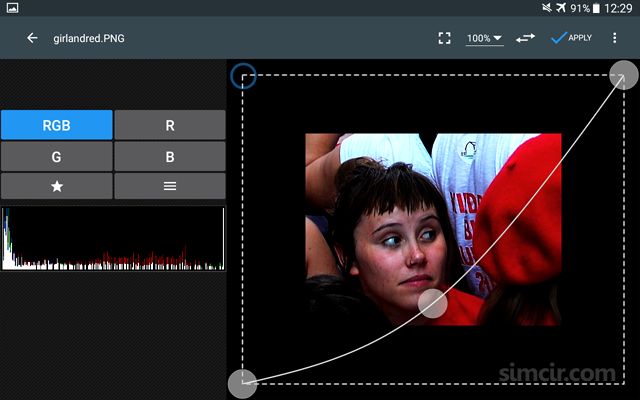 Discard that and then tap the R, to give you the Red graph. Now red will be applied to the image. Unfortunately you cannot select just the items in Red, the whole image will be adjusted—especially the reds. Because Caucasians skin is actually pink, her face gets the Red treatment more than the white shirts do. 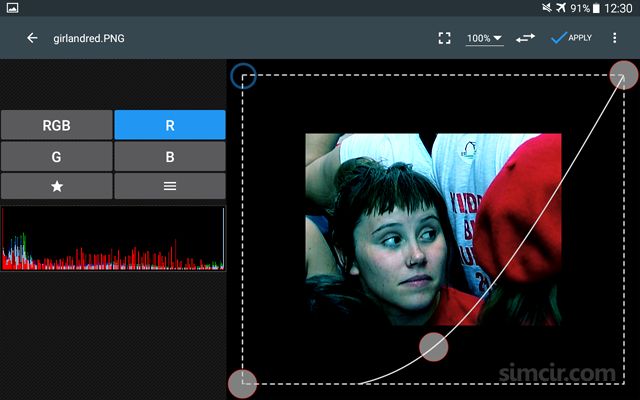 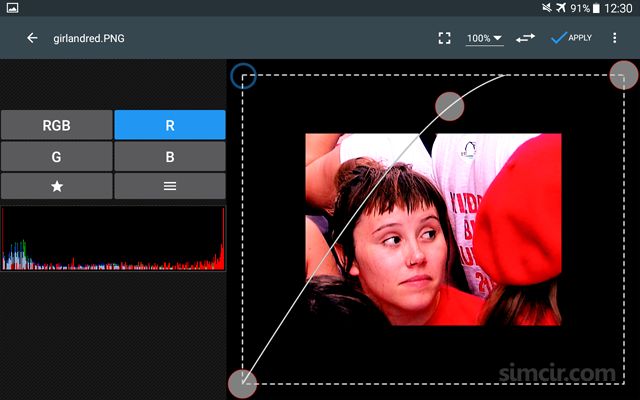 See what is happening in the above two snapshots? Now change the color to Green and you get something different again. 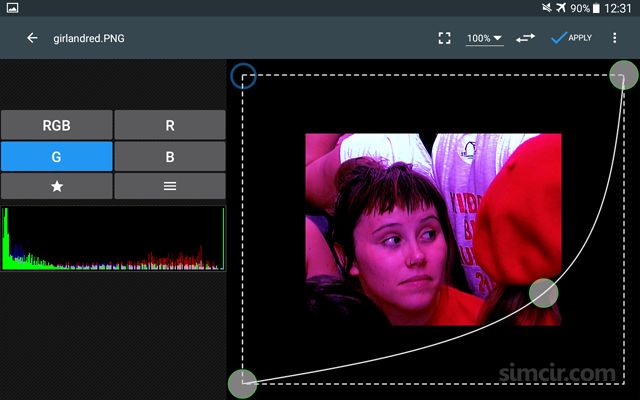 Adding points gives you more control, as you can see above you can have up to 7 points. The Star will give you the Preset, where a name can be assigned to the settings you've used for future images. It's a good idea to keep a notebook and write down what individual Presets are and do—especially if you end up with dozens of them. 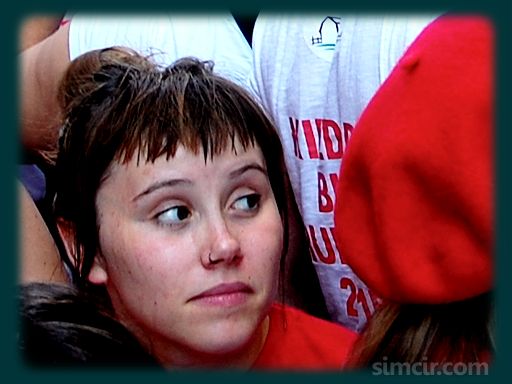 The final
For both Curves and Levels, you will have to spend a lot of time messing around with them to see how they work. As a tutorial, I can only really point to the function and say get on with it. Each photograph is different. What you want is a crisp, clear image with good overall tone, that will work on your device and others.

As mentioned earlier, this gives you a good idea of how MacGyver Photo Editor works. The next two articles show how, by using multiple functions and settings, you can process an image.