One of the main aspects of the San Fermin is the family. More than anything else are the parties of generations getting together. 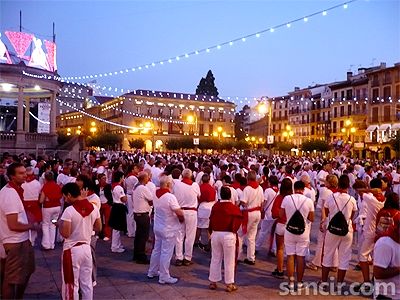 Grandparents, cousins and friends are all over the place. Numerous times I saw three generations of a family out with each other, having a great time. Twice there were four, one with Great Grandma in a wheel chair, surrounded by all her loved ones.

A day for the kids
Every day there is around 3-5 hours of children's events. One day, however, is set aside especially for the young ones. 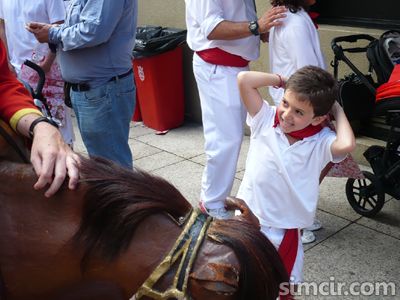 This boy is thrilled that the man on the pretend horse is talking to him (while his sister is being told off in the background).
There were Giants Heads swinging foam balls and shaking hands with the kids. At one point I moved forward to try to get a photo of the Head and felt two hands pushing me aside. I turned around to be greeted with a look of disgust by a 2 year old. Her mother and I both burst into a fit of laughter 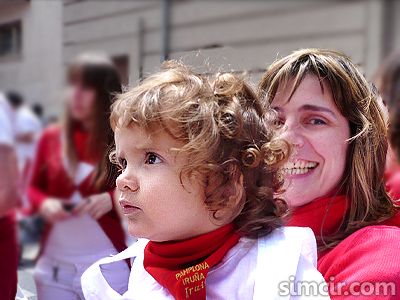 Having moved me away, she was happy to stare again.
When the day is over, a 20 minute fireworks display takes place (every day). Shooting a photo of these is near on impossible with a still camera. You need a good hi-res movie and pick a frame for a still shot. 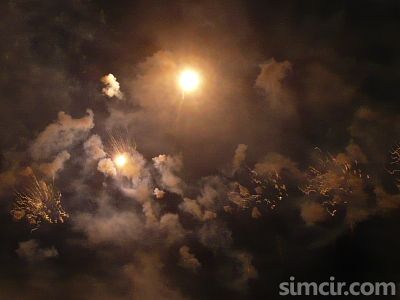 However, not all is in the flash and bangs.
This ethereal photo is more like a nebula in outer space.
Music
Everything from street musicians to heavy metal rock groups are constantly playing. From the start of the day until 3am. Dozens of them—in parks, plazas and on the narrow streets of the old town. 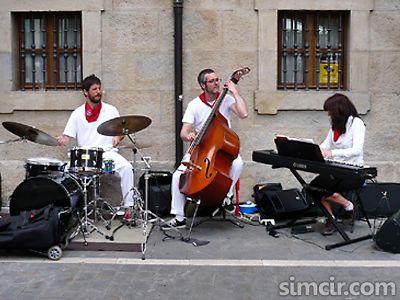 This Jazz trio were very good.
A sad bit 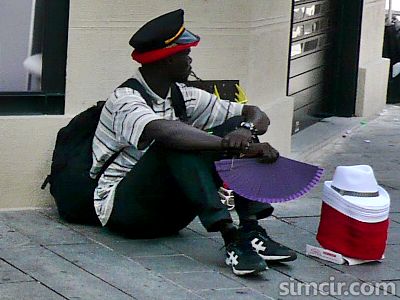 You'll see a lot of these guys around. They are from Senegal, many are immigrants whose visas expired and they had no money to go elsewhere or return home. This particular lot are controlled by one man who pays them next to nothing to sell the hats and trinkets for an inflated price. The so called employer has a stranglehold on them. At least they are willing to work, unlike some of the others you will see begging.
This happens in Italy too.
You gotta sleep some time
There literally are not enough beds in Pamplona for all the visitors. Outside it are about a dozen campgrounds. You can do this whole thing for free on the sleep side, because the city allows sleeping anywhere during the festival (don't try this at normal times though). 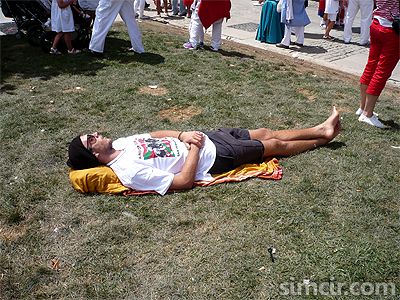 Sleeping off last night's partying.
The center parks are a serious mess to sleep in, but get away from it all and you can find a nice place to stop. You'll have carry your stuff around with you all day though.

Wrap up
The San Fermin is fantastic at all levels. There is so much happening all over the city that you don't have time to get bored. Most people do about 2 days of it.

Planning to chill out for a day after Greg left, I got bored and arrived back at my place around 1am. This continued until the 10th and I finally stopped. That I managed so much surprised me, I've never covered anything this large before.

But what about the Bull Run?
For 3 minutes out of a 20 hour day they have the run. It's a very, very, minor part of the San Fermin Festival. Others can do that. Or, what it's like to be in it.

I recommend the San Fermin Festival. It's great for families, singles and friends. You can party: soft, medium or hard—it's up to you.

Jul 12, 2015
More posts from: The Basque Country
San Fermin 2022 A bit too long in Legarda Back on the road The last page is missing Pamplona without the leaves A festival and change of plans 3 hours in Artajona Durango Buses and a concrete artist Seven and then Faces of the San Fermin Walking Pamplona's City Walls 5 Tips for Surviving the San Fermin The Walls of Pamplona Bolivian Festival of the Virgin Urkupina Cold beer, silence and a water snake Olite in the afternoon Oronoz-Mugaire to Legasa by foot Narrow streets and ancient churches Two hours in Beasain San Martin in the mountains Sunday afternoon stroll San Fermin 2015 - Part II San Fermin 2015 - Part I The artist and the shopkeeper Pamplona's Old Town Festival Back to Basque A short stay in Pamplona