Buses and a concrete artist

I find it interesting how pricing changes for flights. The use of companies which do all the booking for you is, basically, one serious rip off. I manage my own with the airlines direct and nearly always save hundreds of dollars by doing so. This trip to Pamplona saw even the airlines pricing jump around all over the place. From 189 UKP to 60 UKP, for the same flight no less. Obviously I chose the latter and did that only a few days before I left. 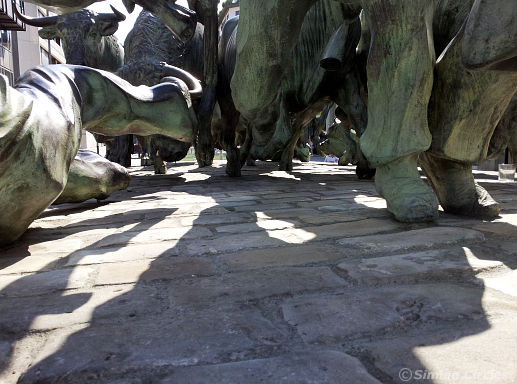 Flying from London's Gatwick Airport was new to me. I've landed there often, but never left from it. The security there stole my 30 year old Swiss Army knife and a small jar of peanut butter. Ben Gurion in Israel has 10 times better security than ropey old Gatwick and my SAK was not a problem. Gatwick has had problems with security staff stealing, so watch out. Why the peanut butter? Oh, that is a bomb. Hey England, shove it! Had I spoken with an English middle class accent there probably would have been no problem. I had to leave home at 0130, which is about 2-3 hours earlier than all my previous journeys.

The flight, once on the BA plane, was no problem. The friendly flight attendant bumped me up to business class in the 2nd row and upon disembarking, she planted a big kiss on my cheek, that's a new thing. Once in Bilbao a bus was taken to the main terminal in the town center, where I had to wait a little over 2 hours for the intercity bus to Pamplona. A wander about, with my larger backpack (13lbs) gave me no troubles. 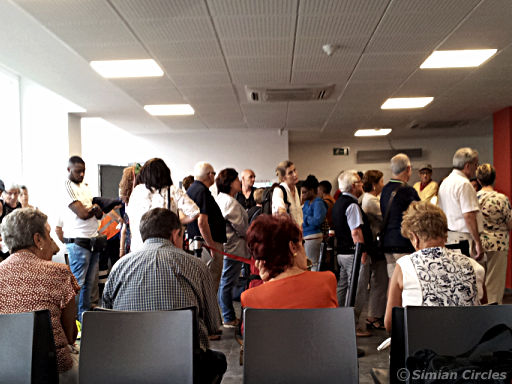 The guy at the top is teaching the apprentice how to make a concrete slab look like a rockface. I reckon he's done a fair job, but has a ways to go yet.
Airport to the Xarma Hostel was about 9 hours this time. It was good to see my friends there and I broke my record finding a room for 2 months. Three hours after arrival, I had the key and moved in the next morning with my Bolivian friends.

This trip is a bit on the winging side of things. There are a couple of places I want to check out in the Basque Country as well as spending time with the folk I know there. Somewhere along the line a next destination will be decided on. September 18th or so I'll swing down to see my friend Catalán in Catalonia, then head out from there.

The first thing I noticed was that the Hostel Hemmingway has closed down. It was the first backpackers hostel in Pamplona, sad to see it go. Also a friend's pharmacy has shut down, where Diego Simon is I don't know.
. . . . . . .

The idea is to be on the road until March 2020.
More posts from: The Basque Country
A Basque farewell San Fermin 2022 A bit too long in Legarda Back on the road The last page is missing Pamplona without the leaves A festival and change of plans 3 hours in Artajona Durango Buses and a concrete artist Seven and then Faces of the San Fermin Walking Pamplona's City Walls 5 Tips for Surviving the San Fermin The Walls of Pamplona Bolivian Festival of the Virgin Urkupina Cold beer, silence and a water snake Olite in the afternoon Oronoz-Mugaire to Legasa by foot Narrow streets and ancient churches Two hours in Beasain San Martin in the mountains Sunday afternoon stroll San Fermin 2015 - Part II San Fermin 2015 - Part I The artist and the shopkeeper Pamplona's Old Town Festival Back to Basque A short stay in Pamplona