When in Porto a few years ago, I noticed a lot of homeless people all over the place. It was an early afternoon and I had only been there a few days, still looking for a room to rent. I crossed the main street and this guy came up to me begging. His clothes were a bit tattered and his English wasn't too bad. I gave him some Euros and reckoned that I wouldn't see him again.

Some days later, after moving into a room, I ran into him once more. This time I was munching on some food and shared it with him. His name was Charles and over the next two weeks, I came across him frequently. At first I would give him a bit of money or buy him some food. Almost every time we parted he did something very strange.

He would stand on the sidewalk, raise his hands and cry out, "God, please can I have my Mama back." 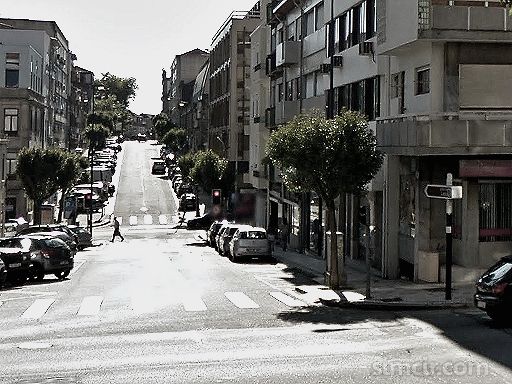 I first met Charles under that tree on the corner. Unfortunately all the original photo's from Porto got lost, including one of him.
One day, in the third week, I ran into him at a nearby building. He had been beaten up and was in a bit of state. I began to notice distinct signs of addiction and realized it was going to get him killed. I told him that and refused to give him money for something that could result in his death. He went totally crazy, ran out into the traffic and I thought he'd get hit by a car, it was almost like he was cursed. This type of reaction I'd seen before, with Heroin addicts. Somehow he managed not to get hit and ran down the middle of the street, his arms flailing about crying out nonsense words. For the next two weeks there was no sign of him.

It was late afternoon, following a lot of photo's being taken of Porto's graffiti that Charles showed up again. Different clothes, clean and he had some food that he was eating. He offered to share it with me and I accepted. We sat and talked for a while. I asked him to show me his arms and feet. He immediately knew what I was looking for (track marks) and told me he was not on Heroin, just various forms of alcohol and some pills.

For the next couple of days, I spend more time with the man. I reckon he was in his 40's, but looked older because of the lifestyle. I asked him why he would pray to have his mother back. It turns out, when he was much younger, someone killed his mother, she died in his arms and that broke him. Now I understood the previous reactions and began moving him to a place where he would acknowledge his addiction.

It takes time for this and the first step on any addiction is to say that you are an addict, it's your fault and you want help. Slamming these people into a Detox Center or shoving more chemicals into them makes it worse. Drying them out and turning them loose on the streets and you just might as well have not done anything at all, because nearly all go back into the drugs or booze.

I know of a group, they are church based and go into the deep, nasty, hell holes of the world to help all kinds of addicts and broken people like Charles. It took me a whole afternoon to find that they were in Porto, so I went to them and got their card with address on. Some folk call it tough love. You are 100% against the addiction and 110% for the addict. At a certain point, the toughness starts. You have to lead them hard to make very hard choices and at first they hate you, but afterward, when they are free, they'll hug you half to death. I began that with Charles. Finally I gave him the address and told him to get on with it. Only he could do that, not me.

You have to go all by yourself to the place, nobody else can do that for you. You have to acknowledge you are an addict and beg for help. There is no other way which actually works. The group I was in contact with are all over the world. They only relate to churches from a distance, because 99% of churches would freak out totally if one of those very advanced addicts walked in, they just can't handle it. Which is why these particular people do everything themselves. Once off the drug or booze, they rebuild the ex-addicts lives. Providing a home, a communal family and work so that some integrity is put back into their lives. It's not just getting them off drugs, it's a complete life style change for the rest of their days.

When I'm on the road I meet quite a few addicts and always try to be available for them, as long as that church based group is in the neighbourhood (and they usually are, almost invisible, but there). Their success rate is around 90%.

I didn't see Charles again. Whether he went to the group and cried out for help, I don't know. What I do know is that I did all I could for him and hope that he knocked on their door.
More posts from: Portugal
Charles The other side of Porto Povoa de Varzim Kicking it off in Porto Lisbon in the rain