The temperature was in the mid ninties, it was humid, the San Fermin Festival in full swing and I wanted some peace and quiet. Where else besides Beriain, an old village out past Pamplona's airport.

My friend Catalán had moved out of Pamplona to the old part of Beriain. A city bus got me there in around 20 minutes. 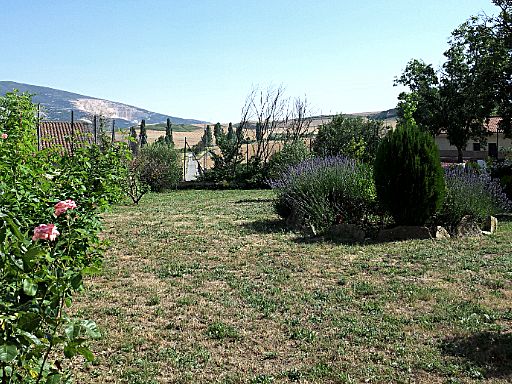 The way into Beriain from the country side of town. 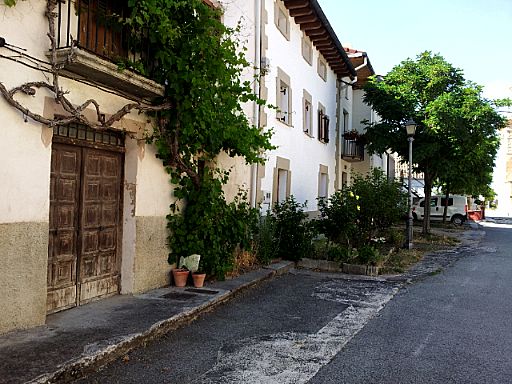 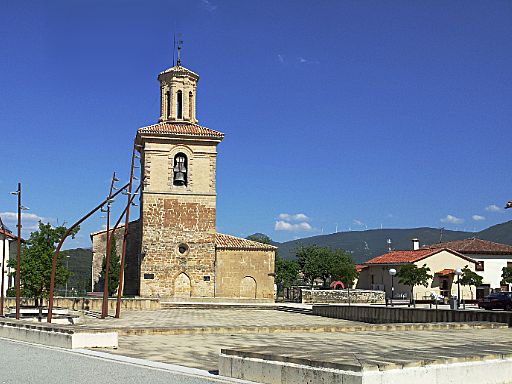 The church is old and on the right a small café/bar, named Elizaldea, run by the fantastic Mertxe (Mercy) She opened it about 8 months ago and there is nothing else but houses here. We had a nice cold beer there during my visit. This part of Beriain is the old section, shops and newer apartments are a kilometre or two away, back towards Pamplona.

Catalán was finishing off some pieces of jewellery, while his wife was putting together some of the displays for the market they would be going to on Sunday. I decided I could make use of the time and wander around Beriain, in the hot sun, and take a few photos.

Beriain is quiet, like very quiet. As I was wandering about I heard a slight noise about 80 meters behind me. It took a minute or so to figure out what it had been. The sound of bicycle tyres on the road with a gentle clicking of the chain in the sprockets of the gears—this village is that quiet. Catalán, who's from Sao Paulo, Brazil, couldn't sleep much the first week after moving here (there wasn't enough noise), because he is so used to living in a loud city.

Never a dull moment—Aug 04, 2016
Catalán's wife was screaming in the kitchen, on the ground floor. He ran downstairs to see what all the fuss was about. A small water snake had somehow found its way in. They are harmless, but the police and animal handlers were called. Evidently the story ran on Navarra TV and in the local papers.

Catalán holds out his hand to
the official for the tiny snake.
From original image on navarra.com 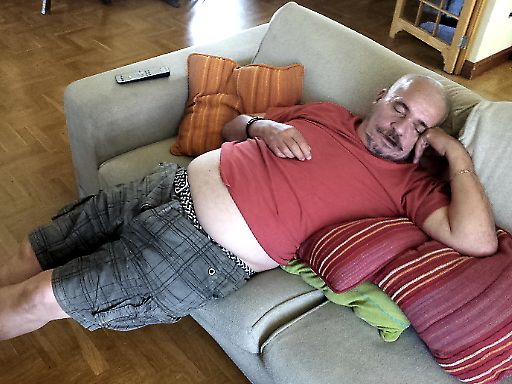 Later in August, Catalán and his wife cooked an Arabian meat loaf dish that was delicious. We gorged ourselves, he ended up on the couch. I couldn't resist a foto.
. . . . . . . .
To go to Beriain, you need to head for Pamplona's main bus station. Right in front is a bus stop. The bus is 16V or 16 Beriain-Veijos. Do not take the regular number 16 bus, it goes to the new part of the town some kilometers away.

Note: During San Fermin this bus stop is closed. You must go back up to Avenida Zaragoza. Turn right and go to the second bus stop. All the 16's stop there during the festival and run about once per hour.
More posts from: The Basque Country
A Basque farewell San Fermin 2022 A bit too long in Legarda Back on the road The last page is missing Pamplona without the leaves A festival and change of plans 3 hours in Artajona Durango Buses and a concrete artist Seven and then Faces of the San Fermin Walking Pamplona's City Walls 5 Tips for Surviving the San Fermin The Walls of Pamplona Bolivian Festival of the Virgin Urkupina Cold beer, silence and a water snake Olite in the afternoon Oronoz-Mugaire to Legasa by foot Narrow streets and ancient churches Two hours in Beasain San Martin in the mountains Sunday afternoon stroll San Fermin 2015 - Part II San Fermin 2015 - Part I The artist and the shopkeeper Pamplona's Old Town Festival Back to Basque A short stay in Pamplona