The pilot struggled to keep the damaged fighter airborne as the weather worsened. With the instruments gone, all he could do was find the hill. He was looking for a small set of woods with a particular shape. Finally, he spotted them off to the left and knew he was near the airfield. The clouds were low as he pulled the Spitfire up, then banked right to clear the other hill, which was a few hundred feet higher. If he could miss that, he would be able to make it home. 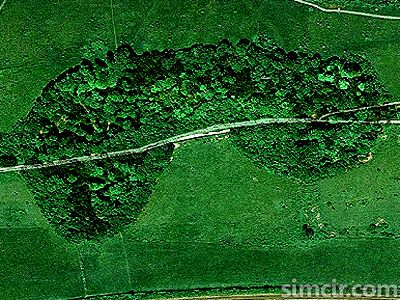 During the Second World War, pilots used this aerial landmark as a point of reference.
This is a bit obscure and you can see it from the ground, but only in a few places. It is best viewed from around a thousand plus feet up. It looks like a pair of glasses. Oddly enough, I used to live in Westcott, the village near it, and covered quite a bit of ground in the surrounding hills. This is the first ramble I've had there in decades.

Getting used to new equipment always takes extra time and I really need to get to grips with the Nikon, I don't like it. It's strange carrying a big camera around your neck and having to negotiate, rough ground and some thick foliage. I sold the Nikon and got a small Leica/Lumix after this trek. The woods are shaped like a pair of glasses and I decided I was going to have a late lunch there, then just sit for a while.

Speaking of equipment. If you do go for this, wear trousers - not shorts. Also I recommend a long sleeved shirt (you can roll them up in the safe parts). There are a lot of stinging nettles at various places and bushes with thorns. The nettles will raise all kinds of welts and the thorns will slice you all up. If it has been raining within the last few days, wear boots because this can get very muddy (otherwise good walking shoes will do). There are some very narrow clearances at places, so use a small pack for this. Oh yes, don't forget a map.

Not all that easy, so I'll give you the name of the main town. Dorking, Surrey, has probably around 30,000+ population. It's claim to fame is a rooster with an extra talon on the back of its legs. When I started toward the main town center, I saw this. 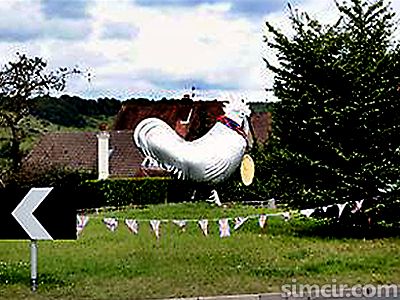 I had to stop I was laughing so hard.
I walked into town, but you can grab a number 32 bus (Guildford direction), from the rail station, which will take you to the village. It is the first village west of the main town. You get off the bus at the 2nd or 3rd stop.

Once off the bus, you want to find a small car mechanics business. Walk down the road beside it until you come to the church (St. John's). There are two roads you can take to access the trails.

If there is one, there are a dozen. Not all of them on the maps. Some are signposted, most not. People walk their dogs and ride mountain bikes around here. To start out, there is the easy way and the "interesting way". St John's Road is the easy one.

Bailey Road (the way I know - because I used to live on it) is the next one after St John's, and that's an entirely different affair. Turn right at the end of the road into what looks like bushes (very high nettles really). There is a rough path there and it may or may not be overgrown. The creek was narrower years ago and I just jumped it. Not so now. Someone put a ladder across it with planks on. It works, as long as you don't lose balance and fall into the water.

Once you are through the winding and very uneven path, you emerge onto the same one that the St John's Road way leads you to. For both routes, you need to turn right onto the main trail when you reach it.

The railroad line here is a short one that runs between two major towns further away. I imagine it must have been something, during the days of steam, to see a little train puffing along with 2 or 3 carriages.

The path is fairly obvious as you go along. You do negotiate some wooded areas, where I found it a bit muddy. This area is handled by the National Trust. On the way I met the fellow who walks this whole area to check stuff out and then, if needed, comes back to cut the pathways overgrowth or grass. He obviously liked his job.

Once you are across the railroad: if you do decide to have a stroll in the fields, watch out. The hill is a huge rabbit warren—like really massive. There are holes all over the place. Some you can see, many are hidden in the longer grass and it is easy to sprain your ankle and could be a leg breaker if you land wrong in a big one. Also cattle graze here, so respect them and don't step in their dung.

You have to go through the right side of the eye glass wood to get in between the two sections. There's a gate with a sign on saying to close it behind you. I went through that and found a spot where I sat down and had my lunch (this is pasture land as well). I just kind of sat there for a while, taking it all in. By then the cloud cover was getting thicker. The day as a whole was very humid but I enjoyed my time there.

There's no one set way (other than where you cross the rail tracks) to reach the eye glass woods. You can wander around - just keep your bearing. Wifi in Dorking, not sure about the village.
More posts from: England
Harold Wood Ruined castle at Eynsford Glasses shaped wood and rabbits Owl and Clock