It's supposed to be Spring. Last month, there was a weak attempt and then for some reason a retreat happened. We are still looking for it. Why should I go visit a town at such a time? Especially, when it appeared that it's just a dormitory north east of London.

This place got it's name from one of only three kings of England who died in battle (oh boy, here we go, Ted's slipped into history mode). Hey guys, there's nothing else here! Harold the Second (AKA Harold Godwinson) was some throne warmer, that got the snot stomped out of him by William the Conquerer and there's not a thing I can do about that. Nothing unique here, but it is obscure—you have to admit that.

So why go there?

It's a dot on the map. Before the Internet, that's all anyone would know about the town. So arrival would be on a whim and take it as it comes. I reckoned that I would stroll around, talk to some of the residents (usually the best part) for a while, have some lunch and meander back home. It didn't quite turn out that way. 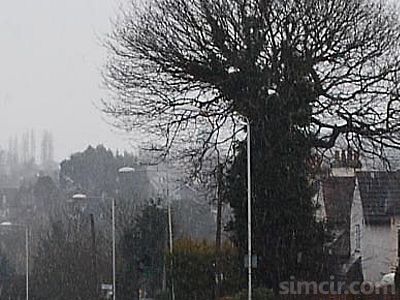 Yes, that is snow.
It was cold wet snow and I got soaked - again.
I had asked about the town last week and got a negative response. Maybe it's because the weather is still wintery and I was bored, but for some reason I thought—why not. It was just a day trip that's way out at the edge and at first I did not realize this was just inside the ring road (otherwise I wouldn't have wasted my time).

As I stepped out of the station that hit me in the face. It bore out true, except for one barmaid in a pub where I asked directions. She was the only person I met or saw that was not glummed all over. Maybe it was the weather, maybe not.

Everyone I saw there had this glum expression. I asked where Wifi was in a travel agency and this lady (glumminess exuding from her like dull toothpaste from a tube) said, "there-is-no-Wi-fi-in-Har-uld-Wud". Oh yes there is sweetheart, they have it in that pub near the top of the hill (where the cheery barmaid is).

The snow became really heavy, I was still looking for an entrance to a sort of park, heath area I had intended to go to, when finally I had enough. By now, even I was getting glum (aaaargh - it's infectious). This is the second time in a row where the weather has been abysmal. The temperature may have been about 40, but the chill factor brought it down to 20 with a nasty, damp wind. Screw this place, I'm going home.

I jumped off the train at Stratford, got me a coffee to warm up and sat for a while talking with a student from St. Petersburg, Russia. She's here studying International Finance with a French language slant. Next year it's either Paris or Geneva. Geneva, go to Geneva, anywhere's better than Paris or London.

On another train I and a guy from India talked geek. He's systems programmer for .Net stuff and knew some of the software people I did a website for some years ago. I got off at my stop and am now home writing this up. I learned that I do not need .Net on my netbooks, slowing things down.
More posts from: England
Harold Wood Ruined castle at Eynsford Glasses shaped wood and rabbits Owl and Clock