London is huge. Like very big with an attitude. Every town and city have rush hours, but here we are talking 3+ hours each way. The workers come by train, tram, bus, car, truck, coach, motorcycle, bicycle and foot, millions of them each day. So you get used to it. The road I live on is near the edge of the megalopolis. It normally has a bit of traffic in the morning and evening, but not a huge amount. Some time before the lockdown, I got up and looked out the window. There was the usual amount of traffic, so I thought.

Look at the finish on the cars of today. Decades ago only custom paint jobs looked that good.
Three hours later, I looked out again and there was still traffic. At the end of our street is a main road into the center of London and it was just as full. Abnormality was shouting at me. I looked out the window on the other side of the apartment and it stretched all down the road. That road should have been empty well over an hour ago. Something's wrong. I've lived here 40 years and never seen anything like it before. There wasn't a gridlock, but close to it. So, grabbing camera, I headed out the door. This could be a write up, after all people do travel in cars etc., don't they.

A young woman (probably in late twenties or early thirties) was walking down the street. She too had never seen it like this before in her entire life, exclaiming the fact with great gusto and then headed off to her destination. The driver of the van, in front of the bus, said it's been like this for many miles and could only say a road was closed. 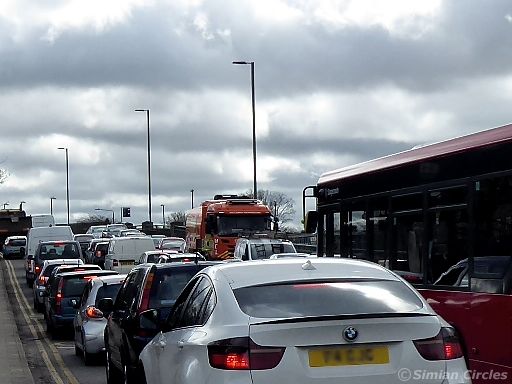 The street I live on is a mile long, I walked all the way up it. Seeing the traffic jam continue on another major route into the center of London, I turned left followed it. This route connects with yet another main road and it too was filled up, except to the left. 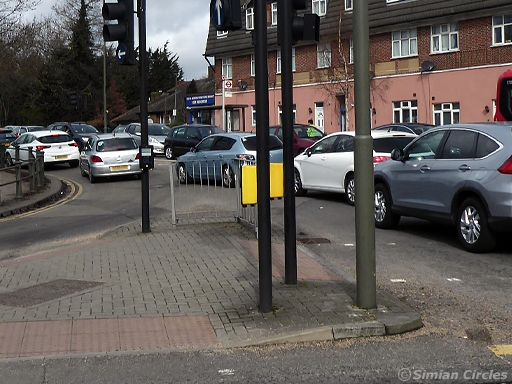 Usually people will honk their horns if someone is a few seconds slow in turning or moving, but not now. These guys had been sitting for hours (it was nearly 11am) and were resigned to the fact that they were not going to move more than 10 feet per go for a very long time. Off to the left the entire main road was closed and blocked off. 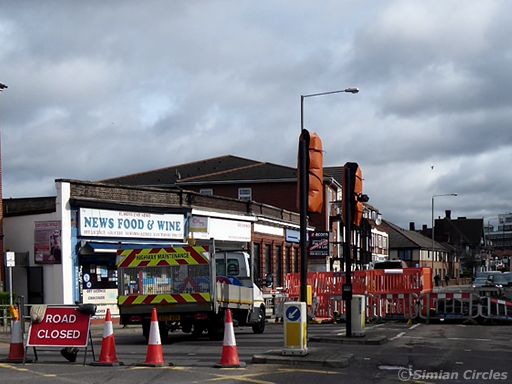 Standing looking at this kafuffle, all I could do was laugh. I hung around there a while watching the cars and vans do their 10 foot dance, amusing me even more. Then I smelled the gas.

This poor guy must be very tired, he's been here doing this since about 6 o'clock this morning.
The workman was there, with a jackhammer and a number of small holes were seen where he had an exploratory dig. I went to the foreman, who was sitting (naturally) in the gas company van and asked the obvious question. There is a very noticeable gas leak and they did not know where it was coming from. The gas pipes have been there for over 110 years.

Some decades back, those pipes carried coal gas. When natural gas began to be used all the pipes had to be reinforced because natural gas pressure is a lot higher. Bit by bit the old gas lines are being replaced with more modern piping and the section here was still on the cards for that. This was the first time that a leak had occurred in the area and it would pick a major junction to do that—wouldn't it.

It took three days before it was sorted out.
More posts from: Other stuff
Periwinkles and butterflies Not the usual sort of thing Finally a lightweight laptop Some asides You're gonna love California About those ego travellers Unplanned and unwanted Those astonishing circumstances Sitting and staring King of traffic jams Finding things to do when you can't get on the road Water and bloom Stay home A winnowing in the offing Don't I wish Sometimes you just need a laugh The Kilmer connection About those Expats The Doors and Portals Just a little shakshuka Maybe it's time for a change Lord of the Rings, a Travelers Guide Graffiti to street art