Looking at the map, the two towns appeared close enough to do a walk. A bus from Pamplona left at eight in the morning, so I headed toward Oronoz-Mugaire and arrived about forty minutes later.

The river runs through the valley and these towns.
Not knowing what to expect, my arrival saw me in the region where the Pyrenees end and the Basque Mountains begin. An overcast sky with high humidity was not spoiled by heat, if anything, it was a bit cool and I had over 8 hours to do everything in.

Bus stops are not usually marked in these small villages, you just note where you were dropped off and stand on the other side of the road, to flag the return vehicle down, when it appears. Schedules are sort of flexible, so give extra time ahead of the printed schedule.

Oronoz-Mugaire
I want to call it a town, but really it's just a village, spread out along a main road, with a few streets on each side. A stop at a small shop, where the lady spoke English, saw me getting a couple of donuts (call them breakfast—it was just 9am). Then wandering up and down the long streets, I reckon about 3-4 kilometers total.

Starting out, after getting off the bus.

Here is an entrance to a large, mountainous, national park. It is big and kind of wild, not something you should even think about taking on in one day unprepared.
Most houses had a vegetable garden, which tells me that the area probably gets snowed in during winter. I could smell the earth and quite a number of times the only things I heard were birds plus the rustling of trees in the light breeze. There is no pollution here.

One field had two horses in, which trotted over to greet me. Another held a few milk cows and at the corner of one property were a number of goats (eyeing me suspiciously).

It appears quite a few of the residents live here but work in Pamplona. The bus schedule has a few runs to there in the morning and the same number back in the evening.

Oreregi
Oreregi joins onto Oronoz-Mugaire and is a lot smaller. There is one item of interest here—the old stone bridge. 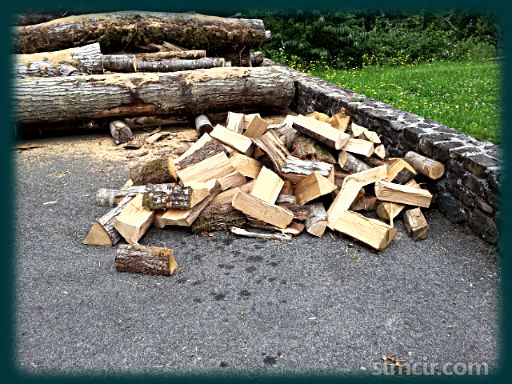 Firewood. This whole area has wood as the main fuel for fires and warmth in the cold winters. Nearly every house had at least one cord of wood stacked up.

The stone bridge.
Nabarte
Walking another couple of kilometers presented me with a mansion and it's grounds. Nabarte doesn't have all that much. People live here just like the previous villages. 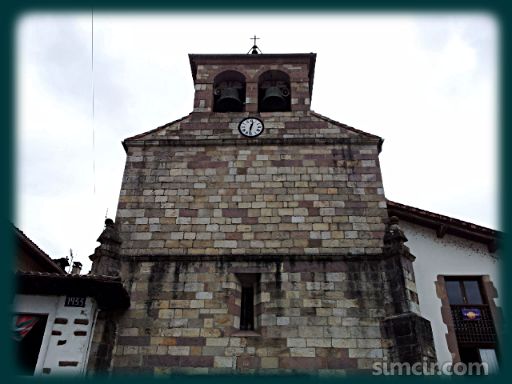 Many towns worldwide have some sort of religious building in them. Spain, like England has the town church and some sort of square.

Leaving Nabarte put me on a long, empty road ahead. There was plenty of room to walk, so off I set. Traffic was fairly sparse.

It's June and time to cut the hay. This small tractor with it's hay cutter looks a lot easier than one of those monster round balers.
Albergue Bertiz
Further down the road is a special hostel which specializes in kids adventure holidays. There are two of these, this was just one of them. It was packed with school kids aged between 9 and 16. They get to go into the nearby national park to do white water rafting, canoeing and the other kinds of things you get to have fun doing in the mountains.

Legasa
Sitting back off the main road, on the left, is Legasa. A small village of around 250 people, but there's a lot here. 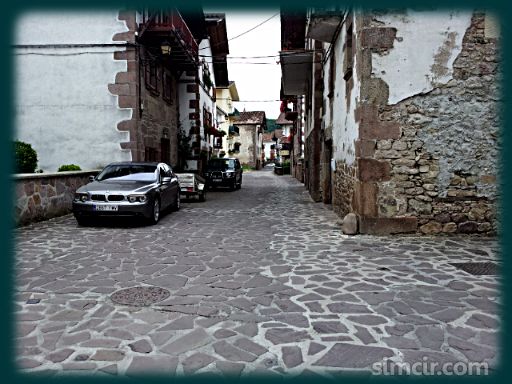 I guess this is some kind of old plough.

The burro was very intent on eating and didn't pay any attention to me. 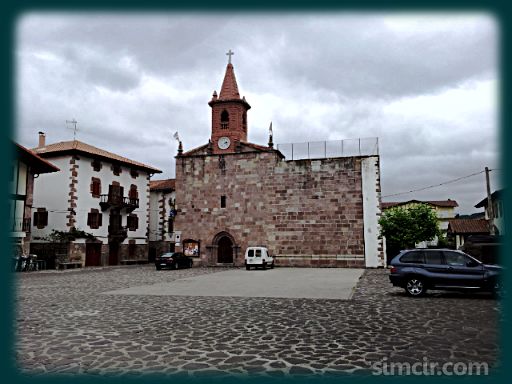 A small square in the town center boasts a bar/cafe and a backpackers hostel.

I ate a late lunch in Legasa's town square, just me and about 6 Swifts grabbing insects as they skimmed the surface of the plaza. Afterwards I walked about a kilometer up and down the road which ascended the mountain.

Though this is only a small village, it does have a thriving industry, which is part of Arcelormittal. Trucks laden with logs, like the one above, bring in the timber, so I am assuming this has somthing to do with mining—I couldn't find out much about it. 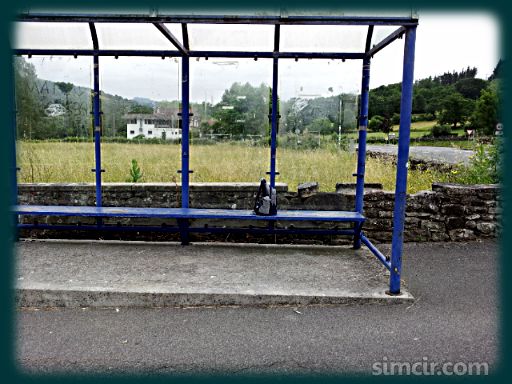 Here is the stop to get the bus back to Pamplona (the bus comes down the main road, on the right—from the left direction, you should flag it to stop).

It only runs at around 1730, I was over two hours early, got bored and thumbed a ride back to Oronoz-Mugaire to catch the bus (it goes through Legasa first, on the return journey).

Overall I probably walked around 16 kilometers. The main road, between Oronoz-Gumaire and Legasa is 6, the rest was wandering about on all the other streets and just nosing around. Even then I had spare time. There was an earlier bus around 2pm, but I just missed it.

. . . . . . . . .
To reach Oronoz-Mugaire, you have to get a bus at around 0800 from Pamplona Autobus Station. Pay the bus driver (about 5 Euros). The bus will be at positions 21-24 and you should ask the driver for Oronoz-Mugaire.
Jul 04, 2016
More posts from: The Basque Country
San Fermin 2022 A bit too long in Legarda Back on the road The last page is missing Pamplona without the leaves A festival and change of plans 3 hours in Artajona Durango Buses and a concrete artist Seven and then Faces of the San Fermin Walking Pamplona's City Walls 5 Tips for Surviving the San Fermin The Walls of Pamplona Bolivian Festival of the Virgin Urkupina Cold beer, silence and a water snake Olite in the afternoon Oronoz-Mugaire to Legasa by foot Narrow streets and ancient churches Two hours in Beasain San Martin in the mountains Sunday afternoon stroll San Fermin 2015 - Part II San Fermin 2015 - Part I The artist and the shopkeeper Pamplona's Old Town Festival Back to Basque A short stay in Pamplona