Pamplona without the leaves

The day previously: airports, some trains and other public transportation had been shut down due a storm which was three mile per hour short of a hurricane. I had decided not to reschedule my flight and took the chance it might fly as the train bore me to the airport. Departure time was 0825, but upon arrival found that to be delayed for half an hour, which became longer. England was still recovering from the messy weather. Eventually we taxied out to the end of the runway around 0940. The wind was still having a field day with strong gusts shaking the aircraft. Take off was interesting as we bounced around the sky until reaching a quiet altitude, I was finally on my way to Bilbao.

At Bilbao Airport, you head out to the right, where a local bus awaits to carry you into the main bus station in town. For years this has been an outdoor affair, not this time. They have, finally, completed construction of the new bus terminal. It works, but still needs some bugs sorting out. A two hour wait, in glorious hot sunshine, then I'm on the bus to Pamplona. If there is a Ryan Air version of buses, this was it. Hardly any leg room and a bit rough, but eventually I arrive, head down Calle San Fermin enroute to the Xarma Hostel where the folk there are expecting me. It felt good to be back for the planned short stay. 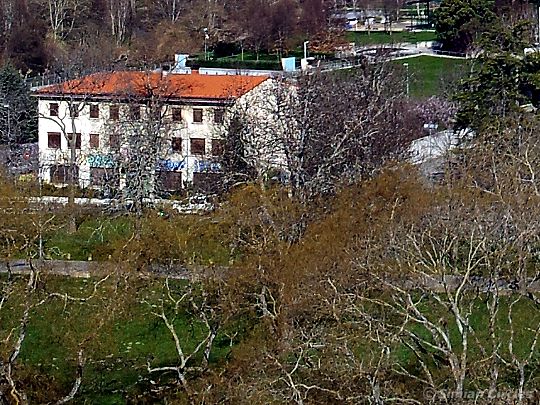 It's winter, not too cold and all the trees have no leaves. The city looks so very different. It's the second time I've been here in February, but the first time it was pouring with so much rain that I didn't pay much attention to trees. This time they're staring me in the face. I'm here mainly to visit the people I know and take a break from England's lousy weather. There may be a place worth a visit, during the second week.

Sometimes it's nice to grab a bus and ride it to the end of the line. Across the street from the hostel where I'm staying is a bus stop where a number of local buses pick up passengers. I grabbed the first one which came and took a look around. What hit me in the face was just how sterile everything is. Some years ago there were only six houses here. Then the developers had a go at it. The original hamlet was levelled and apartment buildings sprung up all over the area. 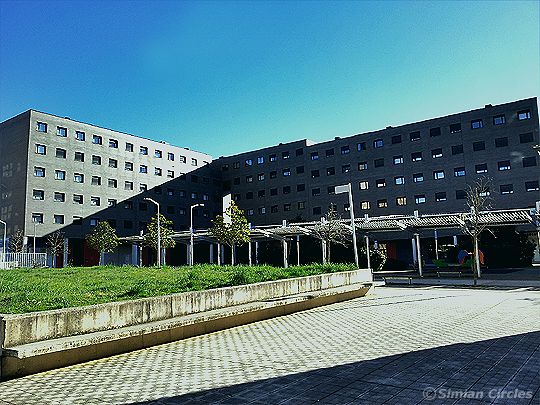 This is a good example of the buildings. Some are better, some worse. All of them very sterile
A local, out walking his dog, told me it's history and agreed with me about the state of the place. It's name? I didn't pay any attention to the front of the bus.

The next day 18 guys arrived at the hostel, from near Zaragoza, to party down for the one who is going to be married.

The one in the center is future bridegroom. He gets married the 21st of March
All of them had great time.

A winter day in Tafalla

About thirty minutes out of Pamplona is the town of Tafalla. It hosts about 10,000 people, is situated between two hills and has the usual mixtures of old and modern buildings. 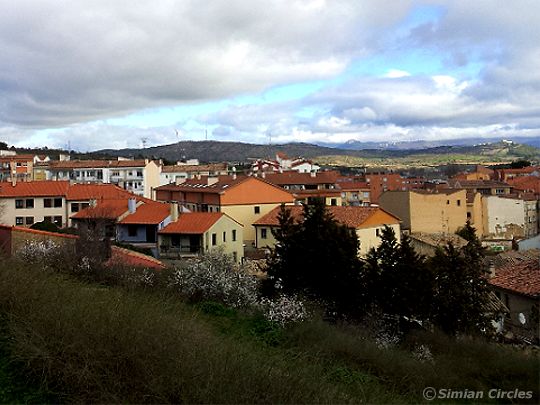 With the temperature sitting at around 5 C degrees, with a colder wind, I was glad I had wrapped up well.

Upon leaving the bus I stepped back to have a good look around. There is one low hill and the other quite a lot bigger. To reach the high one a wander through the old part of Tafalla saw me closing in on it, bit by bit. The cobblestoned narrow streets went in nearly every direction you could think of and then some. It's quite compact with many of the buildings made of stone. There are homes, shops and even a kind of mall taking up what was probably once several buildings. The one thing which really stood out was the large amount of graffiti everywhere, not something I saw much in the newer parts of town.

Eventually the structures came to an end and before me was around a 120 foot climb to a cross sitting on the crown of the hill. Pathways wound in a couple of directions, zig-zagging their way to the summit, I followed one, taking photographs as the way continued. There were the usual trees and quite a few seats and wooden tables. Looking into trash cans situated at various levels, I noticed they were empty except for one which held two empty beer cans, maybe the locals only come up here in summer. The entire hill seems to be kind of park. Some time later I stood in front of the cross expecting some kind of inscription, but there was none.

A rest for a short while saw me refreshed and I noticed some steps. There were a lot of them, taking me all the way back down to nearly the point where I had begun my way up. Retracing my steps was not on the agenda, so I meandered through the old town back to the much larger newer part. 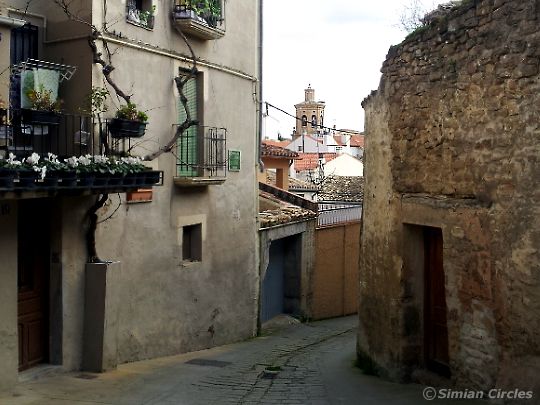 On the way I could hear this woman singing in one the houses and stopped for about five minutes to listen. She had a good voice and it added to the ambiance of the excursion. Looking at my watch, I realized that nearly two hours had passed and headed back to the north part of town to catch the bus back for Pamplona.

When it arrived, everything changed. The Alsa bus in was okay, but return journey was misery amplified. It rocked and rolled around like a small boat on a choppy sea and I actually became seasick—on a bus no less (I have no sea legs). During one the lurches, I hurt my knee. Somehow the contents of my stomach managed to remain inside and I was very glad to emerge from Pamplona's bus station. The walk back to the hostel was a slow affair and once there I crashed for an hour or so, waking up feeling normal again.

Originally the plan was to grab a bus to Bilbao, then catch the plane. Not all plans work out the way we want, do they? The bus from Pamplona would not arrive until after my check in time. This meant stopping over in Bilbao for the night, not something I particularly cherish. I had a bed held for me at the Pil Pil Hostel, not too far from the station where I could get the airport bus. While the hostel was clean, I had to make my own bed—with full sized sheets and blankets yet. It was a very cramped space but I managed it, without hurting my back. What blew the place out was that lights and the like were not on before 7am, which was after the time I wanted to leave in order to get the bus to the airport. Also the mattresses, while not too hard, were quite short and narrow. Pil Pil is not recommended, there are other and better hostels in Bilbao.

The flight back was a bit choppy but okay. One thing I learned is that airlines are going to be flying lower in the future, so bumpy flights will be come the norm again .

Oct 25, 2021
It turns out this was my last visit to Pamplona for probably a long time. See here
Mar 01, 2020
More posts from: The Basque Country
San Fermin 2022 A bit too long in Legarda Back on the road The last page is missing Pamplona without the leaves A festival and change of plans 3 hours in Artajona Durango Buses and a concrete artist Seven and then Faces of the San Fermin Walking Pamplona's City Walls 5 Tips for Surviving the San Fermin The Walls of Pamplona Bolivian Festival of the Virgin Urkupina Cold beer, silence and a water snake Olite in the afternoon Oronoz-Mugaire to Legasa by foot Narrow streets and ancient churches Two hours in Beasain San Martin in the mountains Sunday afternoon stroll San Fermin 2015 - Part II San Fermin 2015 - Part I The artist and the shopkeeper Pamplona's Old Town Festival Back to Basque A short stay in Pamplona