My fifth journey to Pamplona, Spain was different this time. All previous trips were from London on the Eurostar train to Paris, then a sort of hopscotch across France and the Basque Country. This time I was in Porto, Portugal when I set out to Iruna. I think this journey post is about to become a tradition.

Spending over 12 hours on a train is not my idea of fun. Another trip, from Pamplona to Lisbon proved that. So breaking the travel time in two was much more appealing. It's still a staggered route though, there is no direct service from Porto.

Thete are a number of ways, all very long winded, to travel from Porto to Pamplona. Train was the fastest and turned out to be the cheapest for me. At first the fare, excluding a night in a Leon hotel, was 120€. When I went to Sao Bento station to buy the ticket, I was in for a treat. A special promotional offer was on the cards—for 83€. The hotel in León cost me 30€—a beyond first class seat then the hotel, saved me 7€! I can live with that. 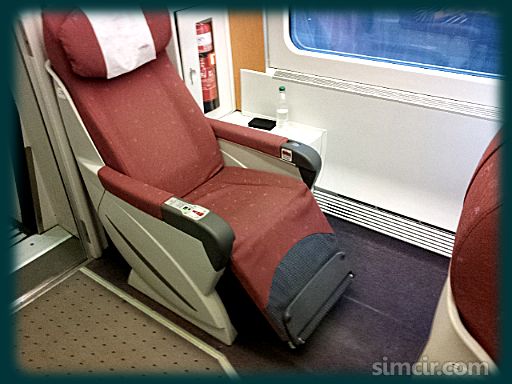 Look at all the room! Spoilt I was, spoilt. Plus a free drawbag containing: a blanket, eyeshields, earplugs and headphones. Will ask about promo's from here on.
Seven hours in Vigo
At least setting out at 3 am (normal Eurostar trip time) was not on the cards. My train left Porto just after 8am.The time to Leon, from Porto, is only about 8 hours. Unfortunately, you have to change trains at Vigo and endure a seven hour layover. That means having to carry your backpack everywhere.

So just what is this temporary hold up in my journey? 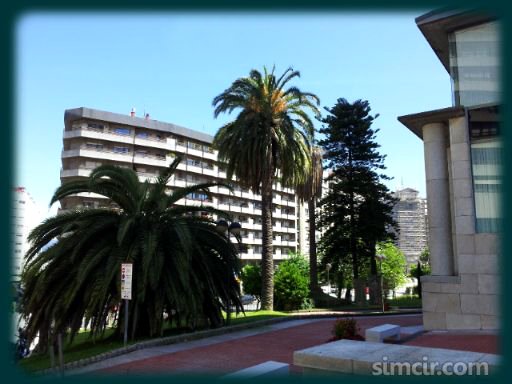 Where I ate my lunch.

Vigo is a major container port.
Leon
What ease we can do stuff today with things like Google Maps etc. Arriving after midnight in an unknown town, used to be a pain in the butt, but upon leaving Leon train station, I knew it was an easy 5 minute walk to the hotel I had reserved a single room in.

Very little was seen of Leon. A quick breakfast for 3€, saw me still under that old standard rail fare. A train to Pamplona left shortly after 10am and off I went. My own seat, with tons of room, what luxury.

In reality, it is not a very long distance between the two cities. On that train, however, it took 7 hours! At one point the thing was crawling along at 12kph. I figure the average speed was about 50 overall. A stop at Vitoria-Gasteiz to get another train for Pamplona and an hour or so later, I was on the city bus heading toward Baja Navarra—where the Xarma Hostel is located.

I like Pamplona and the Basque Country, it's almost a second home. It was good to meet up with the people I know there and within a week I'd managed to find room to rent for the next three months.

One aspect of Pamplona is that there are a lot of South Americans here. Many of them are short, some very much so. The lady who has the apartment where I rent my room, is from Bolivia and about 4 feet, 6 inches tall. Her son speaks a little English, so I am in a position of having to learn Spanish, whether I like it or not—which is good.

The plans ahead
There are some more places I want to check out in the Basque Country, spend a few days in Poitier, France and maybe some time in Andorra. Also, last year I wrote up the San Fermin Festival—this time, I am just going to enjoy it.

A major project will be writing an article (plus blog post) about the Walls of Pamplona. That alone could take three weeks just shooting the fotos and gathering information from various sources. I will not do the article while on the road, it's too big so I'll write it when I return to London. By then it'll probably be November and I just may head for Israel.
More posts from: Spain
Madrid memory Reaching Pamplona differently Couple of days in Seville