Around the world, the Covid Pandemic has brought about many changes. Some are needed, others not so. A lot of businesses went down, events cancelled and travelling had almost ground to a halt. With the Omicron version on us, the virus is a lot like the common cold, so things are laxing up somewhat. One aspect is that I can now fly, albeit more expensive, and the San Fermin can once again take place. Seeing that Pamplona has not held one for two years, this one is expected to be just a little bit crazy with 537 events and I am going to get in on some of it.

It was about 5 or 6 am, on the 6th of July, when I was awoken by loud claps of thunder with lightening flashing all over the sky. Raising the roll down shutter, I saw the street below covered with hail. The festival begins at 12 noon so I had time but could not get back to sleep as the rain poured down. It was still raining lightly when the journey to Plaza Castillo began. On my feet were some red and white, Chinese imitation of Converse basketball shoes. Converse grip, but these things were like walking on ice if I used the sidewalks. Fortunately a lot of the streets had been cordoned off for pedestrians only, so it wasn't too bad. 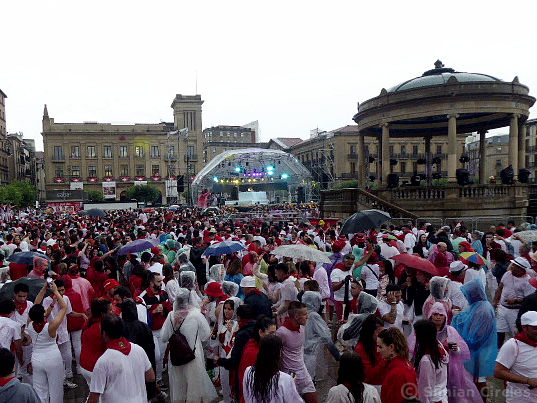 At one point I, plus a few thousand others, dove for shelter as the skies opened up and dumped the cold wet water over us all. It lightened up and a good sheltered place was found at the edge of the plaza. The firework went off and the 2022 San Fermin had begun. I returned, wet and cold, to the room where I was staying and donned some dry clothing.

Some days before I had met up for a beer with Pedro and Ainhoa, who used to run the Xarma Hostel on Baja Navarra. It closed down during the pandemic and both now have new jobs. Pedro lives in the old town and even though it took a while I found the street and spent a while with him and his neighbours. They had a couple of tables under some waterproof covering. The side streets, where most people don't go are like this on the first day and throughout the fiesta.

These folk normally avoid the main party streets which are crammed with visitors to the San Fermin. This year's first day was seriously crowded. Mainly people from Navarra came, in their droves, there were around a million people, usually that happens later on. In 2016, the guy I was relating to from office of tourism reckoned 4-6 million attended the San Fermin. This year over 27,000 extra train seats have been made available.

The street was full of tables and a small bar was open, attended by Hell's Angels Spain (who had parked their Harleys elsewhere), one of them must have been from that street.

The street was alive with families sharing their time, food and drink with each other. Children running around as they usually do, the occasional song and no crowds. It was quite relaxing.

Further down the road was a sort of plaza with a big event stand. Each day of the festival had different musicians lined up for their performance. When a concert began everyone headed to the plaza to take part in the event. Most of these folk rarely go to the 'tourist' areas.

For the next few days I wandered around the old town, discovering many streets doing similar.

This was my last San Fermin.
More posts from: The Basque Country
A Basque farewell San Fermin 2022 A bit too long in Legarda Back on the road The last page is missing Pamplona without the leaves A festival and change of plans 3 hours in Artajona Durango Buses and a concrete artist Seven and then Faces of the San Fermin Walking Pamplona's City Walls 5 Tips for Surviving the San Fermin The Walls of Pamplona Bolivian Festival of the Virgin Urkupina Cold beer, silence and a water snake Olite in the afternoon Oronoz-Mugaire to Legasa by foot Narrow streets and ancient churches Two hours in Beasain San Martin in the mountains Sunday afternoon stroll San Fermin 2015 - Part II San Fermin 2015 - Part I The artist and the shopkeeper Pamplona's Old Town Festival Back to Basque A short stay in Pamplona