One thing I notice when out and about, particularly in touristy places, are people rushing about from venue to another. The selfie sticks are out as members of the horde jostle for position in hopes of grabbing themselves in a photo with some building, which everyone must of course see, behind their faces. If it's not that, their smartphones are doing the same or some poor iPhone lemming is lost to the world as she fingers out, I'm in front of the Eiffel Tower right now, etc-etc. I even see some when I'm out hiking.

Usually I'm in-between trains or the like, just passing through, sitting down for a beer or the like and staring at it all. Then, of course, there are the workers, taking a break from their cubicles and doing pretty much the same thing but mostly locked into their smartphones under the impression that this is what life is all about. No it is not!

The other day was hot and humid as I went out for a trek in my usual stomping ground. Sometimes I will sit on a log or a seat for a few minutes usually facing the trail. This time I sat on a bench with the trail behind me. I had never realized what was there, normally I just walk by this particular one. 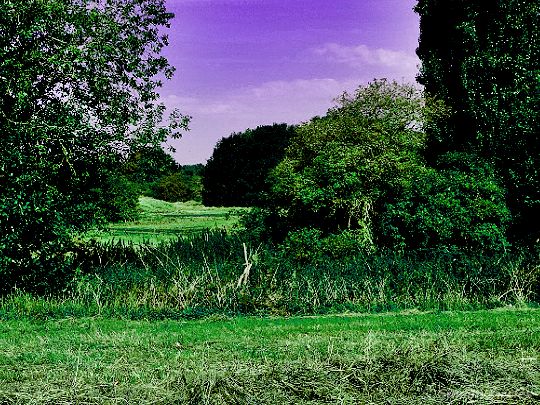 There's some freshly mown hay waiting to be rolled up, which added to the whole thing.
I sat there for at least 10 minutes, just staring and it was so good that I stayed for longer. It can be completely silent there during summer, so that was enjoyed also. About 20 minutes later, I got up and continued my little trek. 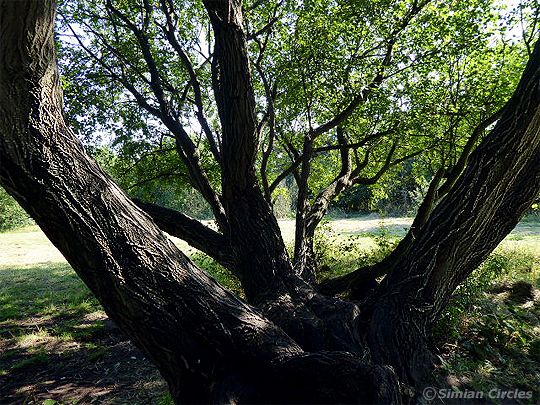 The country park is quite large and with all the kids back at school and people to their jobs, there was no one about. Often I walk by this large tree, which sits back about 100 feet from the trail. It looks like one of those old galleons or pirate ships of centuries ago. I had never sat on it and seeing as I'd already had decent stare thought, why not. I must admit it's not all that comfortable on my back, but stayed for a good 5 plus minutes looking down the length of it.

During that session on the tree, I thought of a poem and reckoned sitting was just as good as standing. But not everywhere is near where I live. 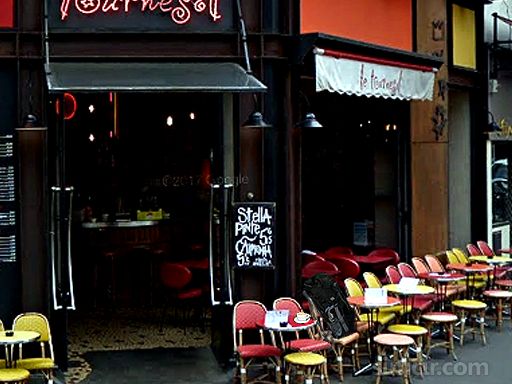 This one was in Paris and I wrote it up here.
That poem
What is this life if, full of care,
We have no time to stand and stare.

No time to stand beneath the boughs
And stare as long as sheep or cows.

No time to see, when woods we pass,
Where squirrels hide their nuts in grass.

No time to see, in broad daylight,
Streams full of stars, like skies at night.

No time to turn at Beauty's glance,
And watch her feet, how they can dance.

No time to wait till her mouth can
Enrich that smile her eyes began.

Sometimes standing is the only option 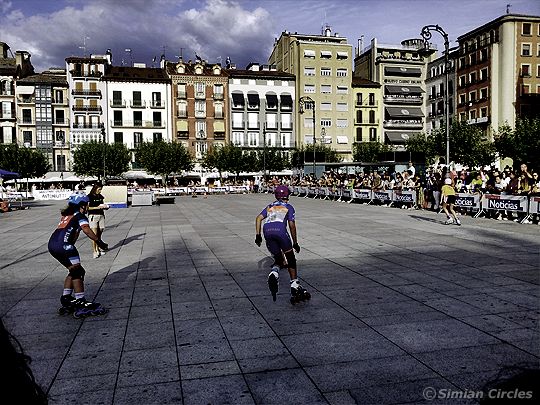 Pamplona had the European Championship skating tournament going on a few years ago. Streets around the bus station were closed as teams from many countries raced. In Plaza Castillo (in the old town) there was a mini version for kids. I just stood and watched, listening to parents and friends cheer the youngsters on. 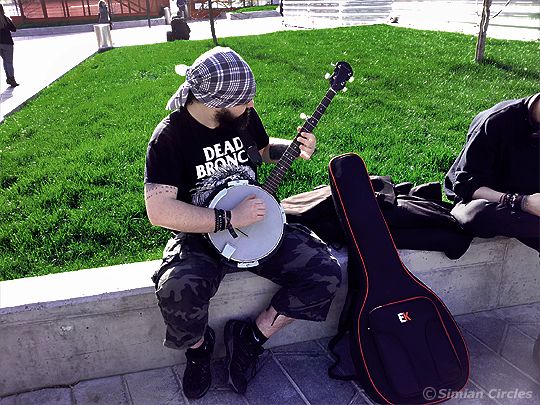 The last time I went through Bilbao, I had an hour to wait for the bus to Pamplona and ran across this guy playing his banjo. He wasn't doing it for money, just for fun. So I asked if he knew any Flatt and Skruggs. He gave it a bit of a try and then went on to something else as I stood and listened.

I like various forms of music, not just one kind and Bluegrass is one of them. During my time in the Air Force I was in a small bluegrass band and we'd play for our meals and beers occasionally (I played washboard because someone else did the rhythm guitar).

Copyright unknown
When it comes to that kind of music, the piece de resistance has to be—Lester Flatt and Earl Scruggs, Foggy Mountain Breakdown. For those of you who have never heard Bluegrass music, listen to the 1949 original recording here. No one even comes close to playing it as good as those two.

So the next time you're out—stop. Take a break from it all to: stand, sit, stare and sometimes listen.
More posts from: Other stuff
Periwinkles and butterflies Not the usual sort of thing Finally a lightweight laptop Some asides You're gonna love California About those ego travellers Unplanned and unwanted Those astonishing circumstances Sitting and staring King of traffic jams Finding things to do when you can't get on the road Water and bloom Stay home A winnowing in the offing Don't I wish Sometimes you just need a laugh The Kilmer connection About those Expats The Doors and Portals Just a little shakshuka Maybe it's time for a change Lord of the Rings, a Travelers Guide Graffiti to street art