My father told me to go out and make some friends. I stood on a small front lawn of the little 3 bedroom house with the thought that all my life I'd been told not to and didn't know how. After Dad got out of the intelligence game and went full time military, we ended up at Fairchild Air Force Base near Spokane, Washington. In September I would enter my tenth school as a Sophomore at nearby Medical Lake High School, a ropey little place which always makes me think of swimming in a pond of cough syrup. An entirely new episode of life lay before me. I had no bodyguards, no one was trying to kidnap or kill me and I honestly hadn't a clue of what to do with a bit of freedom.

Some of the other officers told their sons to come to me, I never went to them first and still find it quite difficult to make friends, this very day in 2021. Four years later, after a joke thing, I enlisted in the US Air Force. I wanted to go to Alaska, so knowing how to play the game asked for: Florida, New England and California as my first assignment. Naturally they set me to Alaska, right in the middle of the state. 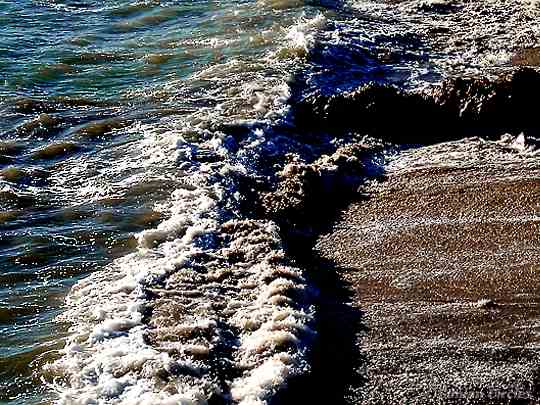 Throughout my life only one set of people have ever freely come to me to relate and they are all Jewish. In Alaska this guy said, "Let's be friends". His name is Carl Cossick and we still are in touch with each other. I haven't seen him since 1967. While I made some friends in Pamplona since beginning the blog, Carl goes a lot further back so I thought I'd share little bit about him.

One of his parents was Jewish. but both passed away when he was young. His uncle was a coach in a school in Massachusetts and Carl became a pole vaulting champion. So much so that later he was on the USAF Olympic team until falling wrong and broke his hip badly. He's carried a replacement hip every since. He moved to California and another relative there was the Mercedes Benz dealer to the movie stars. As a result, he spent some years relating to a number of people in the entertainment industry. 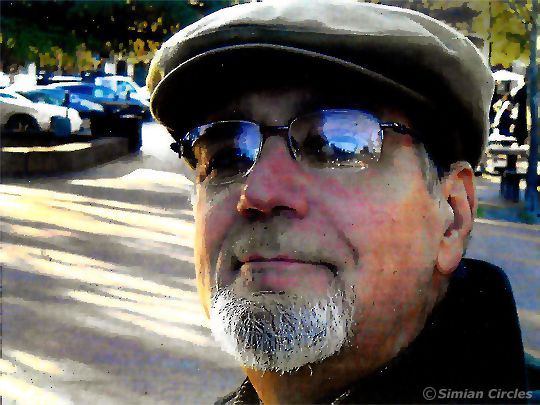 Carl
© Carl Cossick
Carl is an artist, he was recommended to Chouinard Art Institute/California Institute of the Arts by Norman Rockwell and every summer while in the Air Force would attend. Just before he left the military, he said, "You're gonna love California! Try to get down there for your next assignment." No problem—I arrived at Oxnard AFB, California in 1966 and contacted Carl.

Malibu Beach is home to surfers and beach movies. Carl was dating the grand-daughter of Bert Lahr (Wizard of Oz movie), and the three of us ended up on the beach. My position wasn't ready yet so I spent around three months as a lifeguard at the base swimming pool (I was a Red Cross Water Safety Instructor), interspersed with trips into Santa Monica and doing stuff with Carl. He was working with Hanna-Barbera Cartoons for a while on the Yogi Bear show, I think.

Later he had moved to Venice Beach area, then in 1967, went off the grid. It was years before I heard from him again. He'd done some stuff for movies, a group named the Nitty Gritty Dirt Band and the Doors. 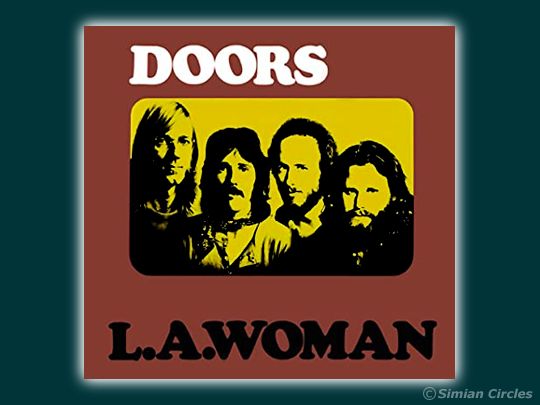 The Doors L. A. Woman album
© Electra
The last thing the Doors did was L. A. Woman. Carl did the art concept for the cover and Wendell Hamick took the photo's. They both got paid well for it, but did not insist on royalties (which he has regretted ever since).

He had a cartoon series in some East Cost newspapers, named "The Usual Suspects" (I think these were the original ones, other peoples stuff with the same name came later).

© Carl Cossick
After that there was more work, but the hip replacement kept giving him probems. He was in and out of the Bay Area VA Hospital and had moved to Mill Valley, where he still resides. A Class action law suit against Johnson & Johnson about their poor hip replacements took a long time to resolve. A number of wounded veterans had been given them and evidently all had grief with the things.

In Mill Valley is the 2am Club. One night somebody found out who Carl was and asked him to do their New Year's Eve Bash poster. Next thing I had was a request to design and do a business card for him. We communicate fairly often by email and recently he told me about some new stuff, but at the time of writing this it has yet to be published.

and then there were wheels....

During 1967, a guy named David moved into the barracks where I was. Both of us had the same surname so decided we were "distant relatives" and I was introduced to the Southern California hot rod and cruising scene. His family lived in Whittier where his dad had a large dairy. David had a 1940 Ford with a fully blown Olds' Flathead V8 in. The carbs stuck out through the hood and there were no mufflers, just 8 short exhaust pipes spitting out flames—it did 140 mph in the standing quarter mile. We had to drive with the windows down, otherwise the thing'd kill us. A short while later his Dad passed away and left him a fair bit of money. 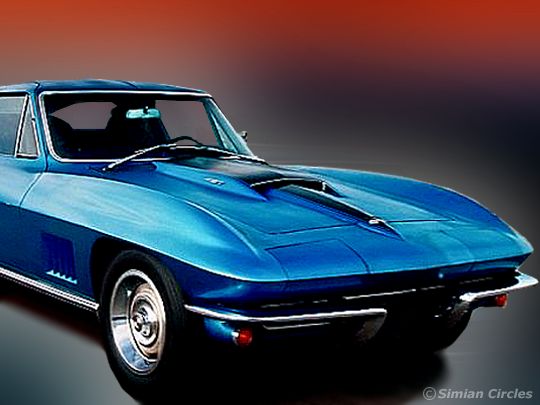 David went out and bought a '67 Corvette. Not just any 'Vette, but the 427 with Ford Tri-power carburation, this thing hauled big time. It'd do 170 mph without blinking, until one day on the way back to Oxnard AFB, the engine blew up, doing 60 mph, on the freeway near Van Nuys. He was due to have 30 days leave and needed his car, so Chevy (bless their dear little hearts) flew out 2 guys with a full race Can-Am engine to put in the 'Vette. I had to pick up the thing from the dealer and it was quite a trip. The clutch was so hard that I needed two feet to push it down. Some time later both our left legs had a lot more muscle in. David chickened out at 260 mph on a test run at Riverside Raceway. That specific Corvette was "THE" car which got 'Vettes with stick shifts banned in California for decades. David had to sell it because the insurance rate was astronomical and got himself something new. 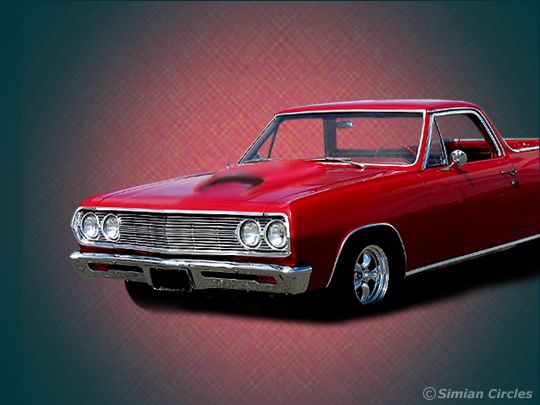 This is the best I could do to give you an idea of the El Camino, the original was probably destroyed by some hot rodder. That Corvette hood scoop is there for a very good reason.
A custom car builder (I think his name was Mazmanian) built two of these. He had '65 and '66 models, swapping the rear ends. One was silver based, metallic blue. David's one was: gold based, candy apple red—which changed color under street lights, with the '65 front end and '66 rear end. It had a full race, precision balanced, 350 Corvette engine with 456 slip diffential, drag gears and a stick shift which you could change gears at red line without using the clutch. However, being a pick-up, the rear wheels would spin too easy. Those wheels had 11 inch wide rims with big tyres on. So David filled the back part with a thick steel plate. Have you ever seen an El Camino do a wheelie? That one did.

We cruised in both cars all over Southern California, mainly in Oxnard and Whittier Boulevard from Bob's Big Boy to the Hacienda Cafe. I was often in Whittier and got to know the family. David's grandmother made the best Enchiladas I have ever tasted. 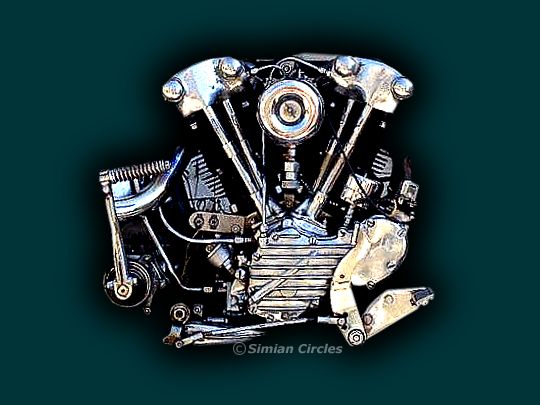 David's brother bought a basket case 1947 Harley Knucklehead and turned it into a custom bike with 50 coats of candy black lacquer and what they termed a mouse-trap clutch assembly. You could use the clutch with your little finger. It was the very first bike I rode, done during my cross country trip in 1968. I let the clutch go and all it did was sit there with the rear wheel spinning and smoke coming from behind me. I realized that this thing needed to be treated with a helluva lot of respect.

Oh, by the way—I really loved Southern California.
Jul 01, 2021
More posts from: Other stuff
Periwinkles and butterflies Not the usual sort of thing Finally a lightweight laptop Some asides You're gonna love California About those ego travellers Unplanned and unwanted Those astonishing circumstances Sitting and staring King of traffic jams Finding things to do when you can't get on the road Water and bloom Stay home A winnowing in the offing Don't I wish Sometimes you just need a laugh The Kilmer connection About those Expats The Doors and Portals Just a little shakshuka Maybe it's time for a change Lord of the Rings, a Travelers Guide Graffiti to street art